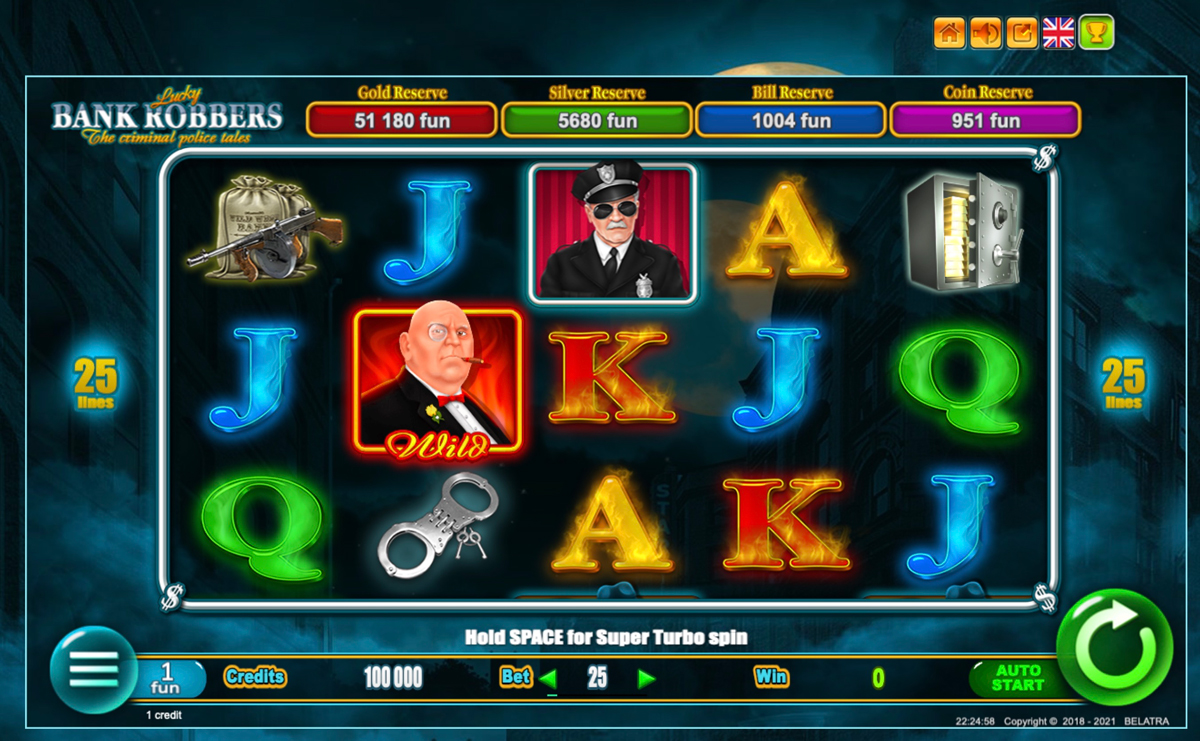 Colossal icons, free spins and stacked symbols mix to help you win one of four progressive jackpots in Lucky Bank Robbers. The slot is released by Belatra Games and it utilizes a well-known Hold & Spin model, which is yet not manifested anywhere in their slot description. Alongside a regular play mode, the video slot has two gamble features that you can choose from or switch off in game settings. Some players would find the slot machine too simple but the four-leveled progressive jackpot offsets the lack of bonus features to some extent. Casinoluck.ca experts who tried Lucky Bank Robbers do believe the game is worth a spin.

Full moon, dark misty streets and loud sirens of police cars heard in the distance are what you get to experience during the gameplay. Soft animations of some symbols such as a smoking cigar and smoking bullet holes juice up the entire picture, while masterfully crafted symbols draw the eye. Playing card letters (J-A) are embroiled in flames and add an original twist to the visual style of this online casino game.

Winning combos are created in a traditional manner, by means of at least three identical pics gathered along a payline. The slot machine 25 fixed lines and the permanent coin value of C$0.01. A bet is changed by clicking a right or left arrow, allowing for increasing or reducing a bet between 25 and 2500 credits. This means that you can bet in the wide range of C$0.25 and C$25 per spin.

Comparing it to other slot machines that you may play in Canada, this game has quite small-scale bet amounts that would not be suitable for high-rolling gamblers. And as a final comment to betting, some bitcoin casinos can offer the Belatra library, including the reviewed slot. If that is so, then you can bet and win bitcoins here.

Low-key symbols take the form of differently colored J, Q, K and A which pay out 5 to 50 credits for three, four and five of a kind. They occur on needed patterns quite often.

Fitting the bank heist theme, high-valued pictures depict handcuffs (200 credits for five of a kind), a gun and money sacks (300), a bank vault (400) and a police officer (500). Suppose you play in an online casino at max; in this case, the best win that a single non-feature combination can provide is C$500. There is also a handful of bonus symbols to be highlighted in the paragraphs that follow.

An imposing mafia boss is a wild symbol. Sometimes, it lands in a stack of two or three symbols on any reel, which helps you win more than usual. In all other respects, the don is a basic wild without any additional bonus perks attached.

A pair of gangsters with a smoking barrel are very useful symbols as three of them hitting any spot on the screen trigger a free spin bonus. However, they pay nothing when in the main game mode.

This is perhaps the second popular part of this slot machine, trailing only a jackpot bonus. Three ­– or more – scatters award five free games (but you can win more throughout the feature).

In principle, there is nothing peculiar about free spins except for one interesting aspect around it: reels 2­–4 will be occupied by a giant symbol that will act as nine normal, small symbols. This minor but pleasant feature can cause fantastic winnings during free spins.

Six special bonus symbols initiate a Hold & Win feature that can lead to a big win. Initially, you get three respins but each new bonus symbol starts the 3-spin series from the beginning. Each bonus symbols looks like “XX Credits” where “XX” is a random amount in credit. Once the feature is over, all figures visible on the screen are added together and you receive the ultimate cash prize if you play for real money.

In the course of respins, some symbols can be marked with jackpot names:

The jackpots are progressive, thus increase constantly until hit. The highest, Gold Reserve (C$50,000), is awarded if the 15 cells get occupied by bonus symbols as a result of your respin series.

You can pick either type of the gamble round that would activate after a winning spin:

You can switch off both features in slot machine settings if you do not want either to appear at the end of a spin.

A bank robbery can become a very successful deal with Lucky Bank Robbers, a 5-reel 25-line video slot from Belatra Games. With the bet sizes of C$0.25–C$25, it has the top win of C$500 for normal combos and over C$50,000 if landing a progressive jackpot.

Play For Free
Book of Doom