Cash Spin is a 5-reel slot from Bally that combines a retro style experience with many modern features including wilds and free spins. In this 5-reel slot, you have an intriguing U-Spin bonus where a single spin of the wheel would bring you decent-sized wins or many free games. Another great bonus is a Money Bag that can award 50 times the stake. The reels are full of classic gems like diamonds, rubies and emeralds, all being high-paying symbols with the maximum jackpot prize of $6000 up for grabs. Finally, Cash Spin is perfectly adapted to mobile use. 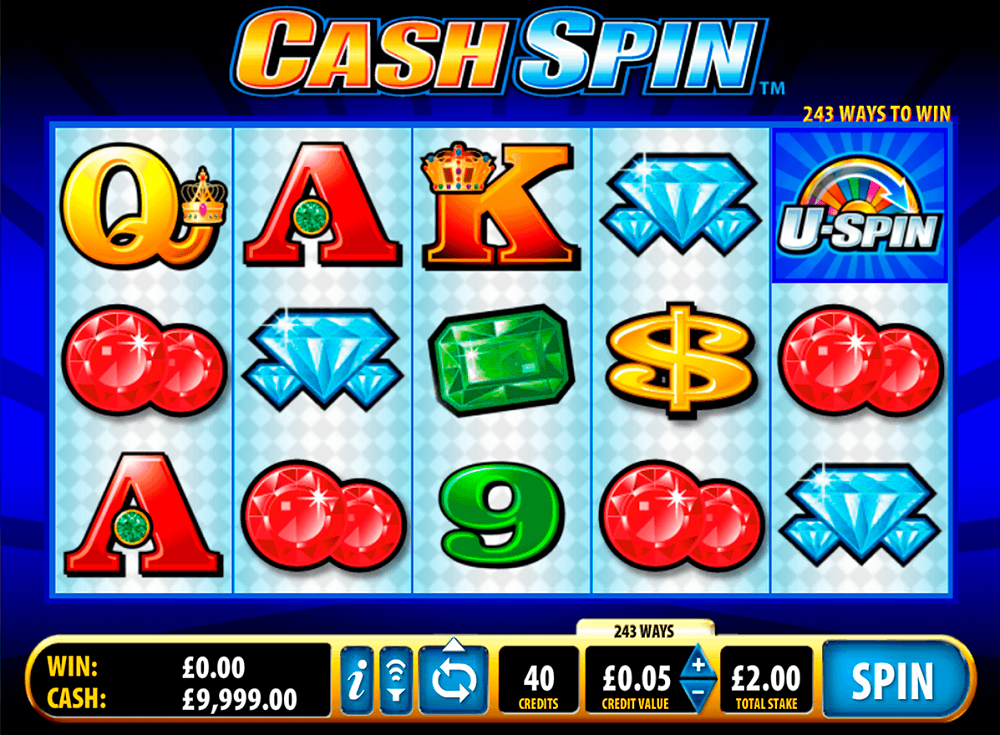 The slot has a classic design due to numerous old-school symbols that were typical for one-armed bandits many years ago. The visuals look a bit dated and lack details but feature-wise the game is fully modern and impressive. Instead of common paylines, Bally equipped the game with the “243 Ways” model, where payouts are awarded when 2 (3), or greater, identical symbols land on adjacent reels left to right. As often as not, 243-ways based slots have modest payouts and Cash Spin is no exception. Winnings here occur very often but they tend to be small, with the maximum jackpot prize being as low as x12.5 times a total bet.

Symbols in the game are grouped into (1) classic card values from Ace down to Nine, and (2) classic images that were often found in slot machines of the past, including Dollar Signs, Emeralds, Rubies and Diamonds. Playing cards award x5 to x100 times a credit value ($1200 at max). The game uses the term “Credit Value” instead of a more traditional “Line Bet” but they mean the same thing. As you might guess, gems are more valuable in how much they pay out and getting five diamonds on the reels awards x500 a credit value ($6000 at max).

Each spin you bet 40 credits and a credit size ranges between $0.01 and $12. Therefore, the minimum possible stake is $0.40 while the maximum is $480 per spin. Thanks to this flexible bet spreading, the slot will be appealing for high-rollers and economical gamblers.

A wild symbol in Cash Spin is a yellow square with the word WILD on it. It appears on the second and fourth reels only and comes in groups of three symbols. However, this does not necessarily mean that you will always see three wilds on any given reel because the three-symbol wild sequence can cover a reel partially (one or two positions on a reel). The wild acts as a substitution for all regular icons but the downside is that wilds cannot create their own combinations.

A U-Spin bonus symbol adds excitement and more winning chances to the game when three of them land on reels 1, 3 and 5 at a time. You are awarded one spin of the bonus wheel that contains two types of prizes: coin amounts and free spins. If the wheel stops on the free spins section, the prize is self-explanatory. And for the record, U-Spin bonus is the only way of getting free spins in the slot.

Before the feature is initiated as a result of the U-Spin bonus, you are awarded x1 a total stake. You are then given 12 free spins where you can play without risking your money balance. The feature can be re-triggered if the U-Spin bonus activates during free games. Ultimately, all your wins get doubled for the duration of free games so, for example, the jackpot combination of five diamonds will pay out $12 000 at max.

A money bag is another scatter symbol that triggers a bonus round if three of them stop on reels 2, 3 and 4. The rules are simple: you must select 1 of 3 bags to reveal a bonus multiplier from x3 to x50 your total bet in the triggering base game. If you play with the minimum 40-cent bet, the award would range between $1.2 and $20. But betting max, you stand the chance to win a massive $24,000.