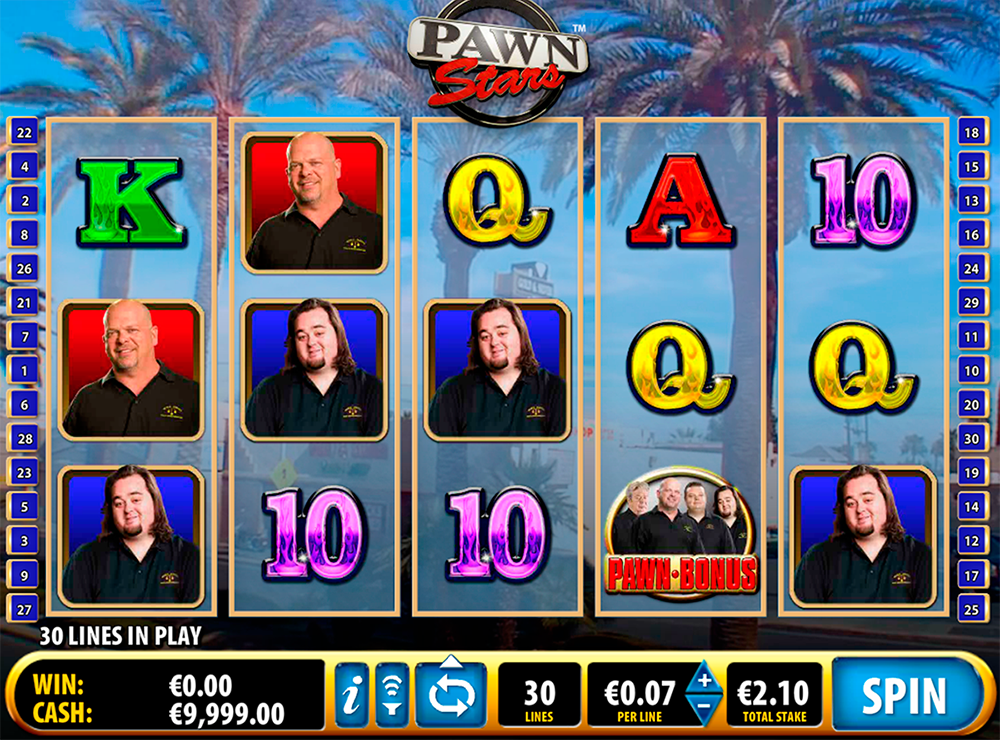 This 5-reel 30-line slot is inspired by the same name reality show televised in the U.S and having 15 seasons and over 500 episodes as of today. Not only fans of the show but also ordinary players will find the slot very pleasing, because it has some intriguing features like an expanding wild and free spins. A Pawn Bonus feature is another exciting event where you would win up to x4000 a line bet. With sizeable wins available in both the features and normal play, the slot will catch on with a wide audience of gamblers who like 5-reel solutions.

When in Las Vegas and looking for the place where to sell or pawn, drop into the Gold & Silver Pawn Shop located two miles from the Strip and co-founded by Rick and “The Old Man” Harrison, both featured in the reviewed slot. The semi-transparent reels are set against palms trees and a typical urban landscape found in Nevada.

On the reels, you will come across close-up photos of the main shop staff including Rick Harrison (co-owner of the pawn shop), Old Man (his father), Corey (Rick’s son and Old Man’ grandson) and Chumlee (Corey’s friend). All of them represent high-value symbols with the highest payout being $3000 for any five of a kind. Like old-time favorite 3-reel slot machines where bar symbols often create mixed combinations, photos of these guys would also pay up to $450 if they land in any mixed order on an active payline. And again, Bally follow their concept of putting playing card symbols (aces and down) into almost every slot. In Pawn Stars, A to 10 cards perform their usual role of producing smaller wins and pay out the maximum of $1125 (x2.5 times a total bet). The highest payer is the logo of the History Channel that broadcasts the series in the United States – five of them pay out $7500. And finally, the minimum and maximum bets are $0.30 and $450 – an enticing offer for high-rollers and low bettors.

A vertical signboard reading “Pawn Stars” is an expanding wild. This symbol can land on three middle reels only and when doing so it expands making the reel entirely covered with the Pawn signboard. Due to the positional restrictions, it stands to reason that the wilds do not complete combos independently.

Three golden rings trigger 10 free spins when hitting reels 1, 3 and 5 simultaneously. Along with free spins, you are awarded twice your total stake in the triggering base game. An excellent addition to the feature is that every expanding wild that lands during any of the 10 free spins comes at a x2 multiplier. On the negative side, you cannot re-activate free spins when inside the feature.

To earn the privilege to enter this exciting feature, you will first need to hit three scattered Pawn Bonus symbols on the second, third and fourth reels. You’ll be presented with 6 items that you would like to sell including a gramophone, binoculars, trumpet, revolver, statuette and scooter. On picking an item, you will be offered a random award of between x200 and x3000 a line bet. You can accept the offer or decline it and take the second price quote that would be from x150 to x4000. Therefore, the maximum potential bonus prize reaches an astonishing $60,000 if you wager the top $15 bet per line.

Pawn Stars is a 5×3 video slot with photographic symbols, nice visuals and a $60,000 max payout. Features include expanding wild symbols, free spins with a wild multiplier of x2, and a pick me bonus game.