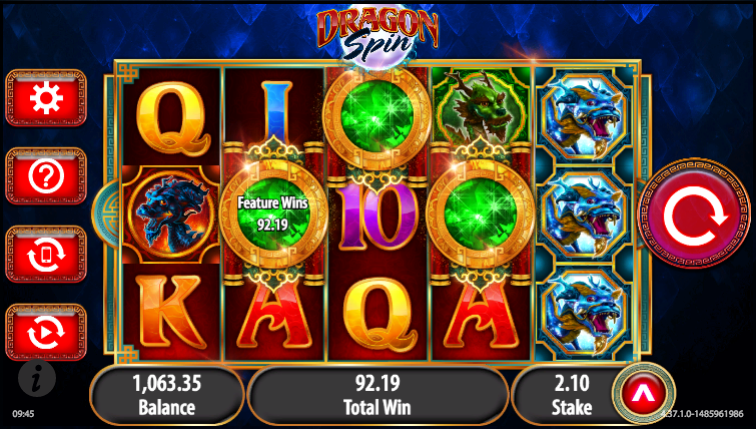 Dragon Spin is a feature-packed slot from Bally with 5 reels and 30 fixed paylines. The number of features applied here strikes imagination. The game boasts of nice animations after a winning spin and numerous cool features like mystery stacked reels, Persisting Wilds, Raining Wilds, free spins and a revolutionary Reel Blast feature that enlarges a normal 5×3 field making it unbelievably spacious. Dragon Spin is an extremely low volatile slot with wins occurring on almost every spin. Wonderful graphics, mobile compatibility and premium quality from Bally Technologies are what makes it a wonderful gaming experience.

The slot’s theme is dragons and the reels are full of red, blue, purple and green fire-breathing creatures as well as playing card values from 10 to Ace. Each of the thirty lines accepts $0.01 to $4, so you can place a bet almost anywhere between $0.30 and $120 per spin. Speaking of payouts in base play, they are very low. Looking at the paytable, you will find that matching card symbols pay x2, x10 and x20 for three, four and five of a kind. So hitting five Tens gives the same outcome as five Aces. This also refers to dragon symbols – no matter which ones create a match, you get x5, x20 and x50 a total bet for three, four or five dragons. In money terms, the highest prize for five dragons makes up $200 at the maximum stake.

This is Bally’s branded feature found in many of their slots. Each reel comes with stacked symbols that are selected randomly. Each individual reel can have 2 or 3 symbol stacks, so odds are good a spin results in one or more winning combinations. Wild symbols (an orange tile with the wording “Wild”) can also be stacked.

Fun begins when you land one of Bonus symbols on each of reels 2, 3 and 4, at which point you are awarded one spin of the Dragon Wheel. After the wheel stops, an arrow will determined which prize you have won: free spins with Raining Wilds, free spins with Persisting Wilds or an innovative Reel Blast game mode.

If the bonus wheel has granted you Raining Wilds, you are awarded 5 free spins. At the beginning of each spin, 3 to 10 random symbols will turn into wilds that will stay in their positions until the reels come to a stop. If you obtained Persisting Wilds on the bonus wheel, you are awarded 5 free spins. The logic behind Persisting Wilds is that each spin you are given up to 7 normal wilds that will stay on the screen for the duration of the feature.

Reel Blast is a captivating attraction of the slot and a unique solution for Bally. In fact, it is similar to what some developers like Microgaming or Playtech use but Reel Blast has a distinctive implementation of a multiple reel feature. In layman’s terms, a standard 5×3 field of Dragon Spin is transformed into three 5×3 fields so you have three independent reel sets during the bonus. The symbol that lands on reel 3 of each reel set extends vertically and horizontally to cover the entire reels 2, 3 and 4 of that reel set. It follows that you have as many as 90 paylines in the bonus, and this further means higher chances of winning combinations.

Dragon Spin is a remarkable 5-reel video slot with a host of additional features, two free spin modes, stacked reels and an outstanding Reel Blast feature. This is a low-variance game so it will be great for smaller wallets. 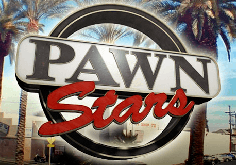