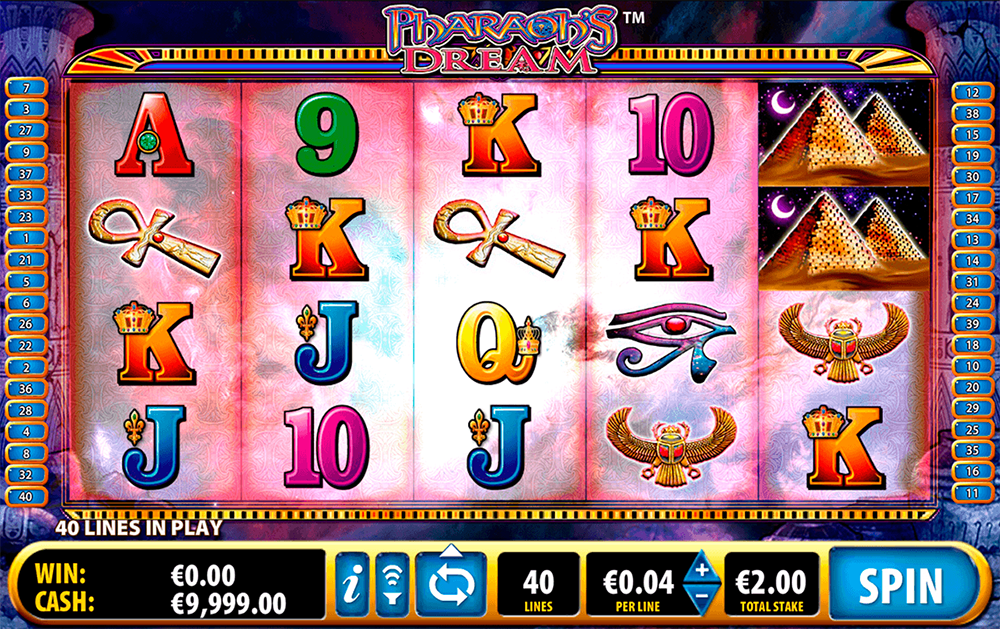 Pharaoh’s Dream is a 5-reel video slot released by Bally Technologies. Its theme revolves around ancient Egypt and pharaohs, as you might suggest from the title. Take a journey to the Nile, the world’s most storied river, and find immense treasures hidden by mighty rulers of the past. In this slot, you can expect to find expanding wilds and locked wilds that create plenty of opportunities for huge wins. The highest award of $5000 is given away for getting five wilds or five Eyes of Horus on a payline.

In Pharaoh’s Dream, the leading software provider puts in place its staple 5×4 reel scheme featuring 20 visible symbols on the game field. The user interface is usual for Bally – it comprises an Autoplay button, paytable button and two controls (+ and -) for adjusting a line bet in the range between $0.01 and $10. Given the number of paylines is 40 and cannot be changed, a bet can be anywhere between $0.40 and $400 per spin, which is a rather typical spectrum for Bally.

A package of symbols relates to Egypt and include scarabs, eyes of Horus, ankhs and other things closely associated with the long gone civilization. As a proper tribute to mystical Egyptian culture, the reels are set between two stone columns ornamented with hieroglyphs and other rock art. Among low-value symbols are usual playing card values from nines up to aces, which pay up to $1000 for 3 to 5 of the same kind. Let’s take a closer look at slot’s payouts. As is said in the first paragraph, the top prize paid for a single non-feature combination is $5000 and this is 12.5 times higher a total spin bet. The second highest prize is $2000 (x5 a total bet). These win values attest to the fact that Pharaoh’s Dream is a low-variance slot that usually pays frequently but most likely in low amounts. Besides, due to wild symbols and numerous paylines, you will often get several combinations at the same time.

A wild symbol depicted by two pyramids at night is a common substitute for regular symbols. It always comes in a group of three or more symbols in succession. This means that reels can stop with several wild symbols visible on any specific reel at a time. One or more wilds that are in the right place will help you complete many winning combinations by replacing for other symbols that are needed. Furthermore, wild symbols are excellent payers and hitting five of them on a payline grants up to $5000.

A pharaoh is a scatter that lands on reels 1, 3 and 5. If you get three of them, you will instantly earn x4 your total bet and 10 free games begin. The feature is a rich source of big wins thanks to locked wilds available during free spins only. Every full stack of wild symbols which covers an entire reel will be fixed in its place for the whole duration of free spins. As locked wilds are kept steady during each bonus spin, they can transport you into a long streak of cash awards for the remaining free spins.

Pharaoh’s Dream is an Egypt-themed slot with 5 reels, 40 paylines and the max $5k payout. Features include stacked wilds, locked wilds and free spins. This is an extremely low-variance game, so do not expect massive wins to arrive after a dozen of rounds.