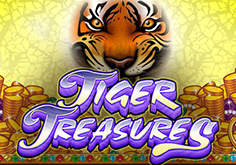 Tiger Treasures is an Asia-themed slot with 243 ways to win so you will not have to worry about paylines since all of them are always active. Lush forests of the Orient hide immense treasures and you stand the chance to find them and earn a $20,000 jackpot. The richest treasures of the wild tiger are waiting for you in superb free spins with a tremendous wild multiplier of x30 that would improve your winnings sky high. The slot has quite simplistic visuals but the gaming pleasure comes from wonderful payouts that can be bestowed to you if luck is there in your life. 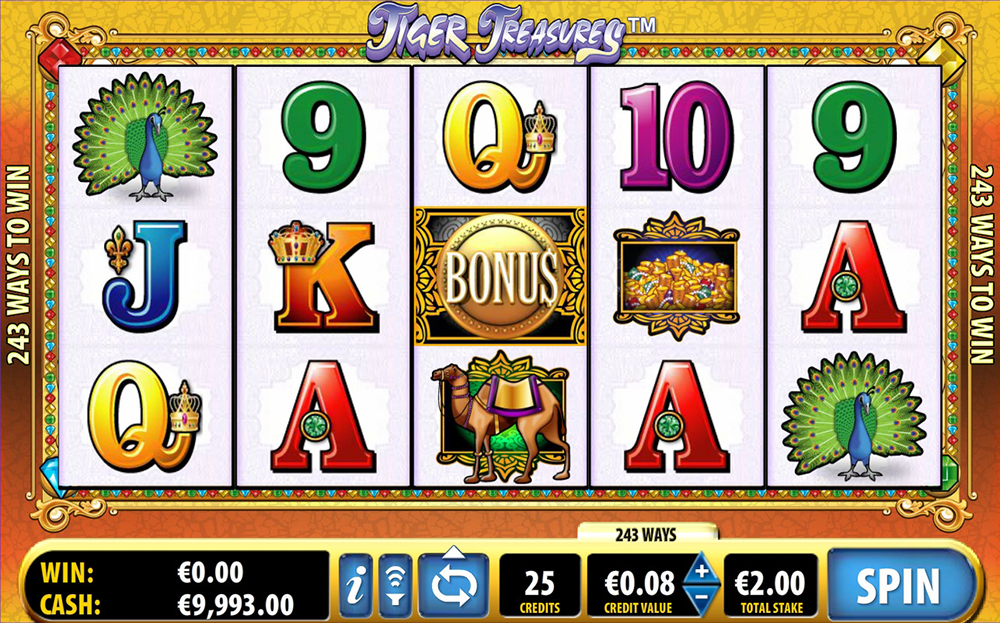 The slot has one changeable wagering option – this is a credit value, which is adjusted in the range between one cent and $16. The slot accepts a fixed number of 25 credits per spin, so a total bet is between $0.25 and $640.

There are 11 regular symbols in Tiger Treasures. Six of them are playing cards from aces down to nines that pay out up to x5 a total bet. The other five symbols are themed ones. These include (in ascending order of prizes paid out) a peacock, a lotus flower, a heap of coins and gems, a camel and an elephant. The last three symbols award identical payouts for five of a kind (x25 or up to $16,000 at max).

The key distinction of slots based on the 243 ways to win system is the absence of paylines. This raises the question of which symbol combinations are considered to be winning ones. The answer is simple: To be awarded in accordance with the slot’s paytable, you need to get three, or greater, of the same symbols strictly on neighboring reels, beginning with the leftmost reel (reel 1). Where the symbols are located on each reel is of no importance. The main thing is that they be on adjacent reels. As there are 5 reels and 3 rows, a total number of possible combinations you can complete is 3x3x3x3x3=243, hence the name.

A roaring tiger is a wild that has the power to replace other symbols, except for a bonus symbol, and help them create winning combos when needed. It appears on three middle reels only and cannot complete combos by itself. It is clear that the wild has some restricted abilities in base game but the same can’t be said for free spins where wilds become the center of gaming action.

A Bonus coin is a feature symbol that behaves like any other regular image, with only one exception. The Coin triggers a free spin selection bonus when three of them appear on adjacent reels left to right. Besides, it pays out up to $20,000 for five of a kind, which is the highest jackpot prize in the slot. Note that the Coin is not a scatter meaning that it is governed by the general rule of how combinations are created.

At the beginning of the feature, you are asked to select one of five scenarios based on your preferences. The choice is not easy because you must decide whether you want more spins with lower multipliers or a small number of spins with big multipliers. If you hesitate which of the five you ought to prefer, opt for a middle scenario. The options offered are:

When playing free spins, a wild symbol completing a winning combination multiplies a normal reward by a random multiplier depending on the bonus mode selected by you. Finally, free spins can be retriggered under the same rules.