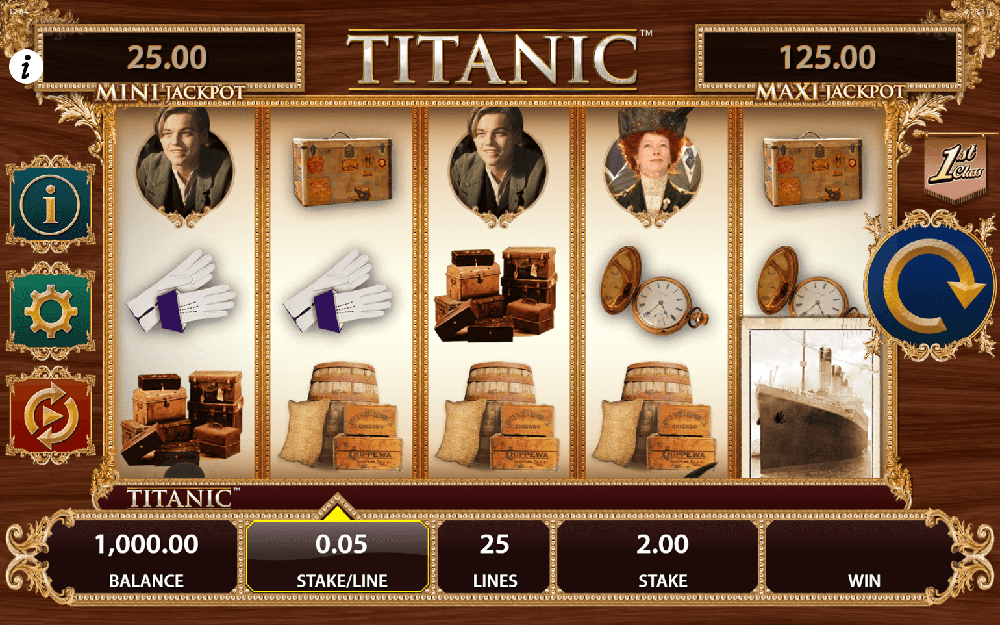 Titanic is perhaps one of the most recognizable and iconic ship names that has left a mark in history thanks largely to the brilliant film of James Cameron and a heart-piercing love story performed by Leonardo DiCaprio and Kate Winslet. The legendary blockbuster was one of the biggest box office hits so it is no wonder that the experienced software provider Bally used its best endeavors to make the same-name slot as feature-packed as possible and keep up with the big-name brand. Titanic is an awesome game with four random bonuses, lots of free spins modes, a wheel of fortune, a couple of pick ‘em all bonuses and more. As a specific treat, you can win the Top Jackpot worth of 100,000 times a line bet.

Titanic is a 5-reel 3-row slot with 25 fixed paylines. Symbols used in the slot represent photorealistic images from Cameron’s film including Jack Dawson (portrayed by DiCaprio), Rose (Winslet), passengers’ suitcases, white gloves worn by Rose and other pictures that recreate the environment of the infamous steamship.

After the game is loaded, you are asked to choose a ticket type that would determine availability of jackpots. Choosing the 3rd class ticket, you bet $0.01 per line but do not have access to jackpots. The 2nd class ticket allows you to bet $0.02, $0.03 or $0.04 per line and win Mini and Maxi jackpots, while the 1st class ticket unlocks all the three jackpots but you must place $0.05 up to $2.50. Note that you can change a bet size (a ticket type) at any time during the game. The minimum and maximum bets do not correspond exactly to the number of paylines because an extra side bet is taken from the player’s balance. With this in view, the minimum and ceiling bets are $0.35 and $100 per spin.

Five Jack & Rose symbols scattered in any position pay out either the Top Jackpot worth 100k a line bet (up to $250,000) OR x500 a total stake, whichever is smaller.

You will be swept by the abundance of features straight away when you start playing. Some of the features occur randomly irrespective of what’s happening on the reels.

A Ship symbol depicting the ill-fated Titanic is a normal wild that acts as a substitute for regular pictures. When the Double Wild feature occurs randomly, 2 to 5 Double Wild symbols appear overlaid upon the reels. When the reels stop, you will get some healthy wins thanks to a x2 multiplier applied to all winning combos.

At the beginning of any spin in base game, two random reels may be transformed into wilds, thus improving your chances for even bigger wins.

You might remember that Jack was a talented artist – he drew lots of pencil black-and-white sketches and showed them to Rose on the Titanic’s deck (Trivia: All the drawings were in fact made by James Cameron). Well, back to the slot game. The Jack’s Drawing is a random feature that can trigger at the end of any base game spin. On a new screen, you are asked to select from 10 tiles that reveal one of three drawings or a Wild Drawing. Your task is to keep on picking until three identical drawings have been found. The total bonus that you can win varies between x150 and x2950 a line stake (up to $7375).

The slot has three non-progressive jackpots. The two smaller (Mini and Maxi) are granted randomly, while the highest one will be described below. At the end of any spin, you can be invited to pick one of three tiles containing Mini Jackpot, Maxi Jackpot or a random amount from $0.5 to $1000 depending on your bet size. In the top of the reels, there are two indicators which display valid jackpot amounts.

Three Ships scattered in any position trigger the Wheel bonus where you can win random cash amounts from x60 to x200 a line bet or one of four bonus features. If the wheel pointer indicates a cash value, you get the related award and the wheel spins again and again until it stops on any of the four following bonuses.

This is a typical pick-to-win bonus round where you are asked to select objects that reveal a cash value (x45 to x100 a line bet), in which case the bonus continues and all subsequent values are totted up, or a multiplier (x2 to x10) to be applied to the said values. If a multiplier is revealed, the feature ends.

If the Safe feature has been won on the wheel, you are taken to a new screen showing 10 doors. Select one of them to reveal a cash amount. After the door is opened, you will find yourself in a room where you are to choose 1 of 5 items (sofa, vase, etc.) to find a multiplier. The final bonus win reaches x800 a line bet ($2000).

There are two free spin scenarios awarded on the bonus wheel. In the Make It Count bonus you receive 10 free spins with locked wild reels and numerous mystery awards. In the Heart of the Ocean bonus, you choose your preferred option:

This is the most feature-stuffed slot released by Bally so far. Given affordable bets that start at $0.35 and a huge 100,000-coin jackpot in addition to two smaller ones, the slot claims to be one of the best in the industry, in terms of bonuses and on-reel events.