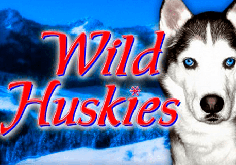 Wild Huskies is a 5x4 video slot powered by Bally. The action takes place somewhere in northern regions where huskies are widely used as sled-dogs and adventure trekking animals. Huskies are one of the most beautiful breeds with their pale blue eyes and thick coat – if you love dogs you must try this slot for sure. The game is played over 40 paylines and features a free spin round. Besides, it has a wild symbol, scatters and a basic pick-it bonus round. The highest prize up for grabs is $25,000. Placed against a snowy mountaneous landscape, the reels show 20 symbols at a time, which is a typical scheme for Bally slots. There are nine regular symbols; six of them are standard playing cards from 9 up to Ace, which are low-paying icons. Themed icons include a snowflake, a husky and a pair of huskies.

The paytable used in the game is pretty straightforward. In terms of payouts, symbols fall under three groups: nines to queens pay out up to $500, kings and aces award up to $1000, while all theme-dedicated symbols will earn you up to $2000. To get an award, you need to hit at least three like symbols on a preset payline left to right.

As is always the case in Bally slots, you can only adjust a line bet, which is one single changeable bet option. By clicking “+” and “-“ triangle buttons in the user interface, you increase or lower down a line bet in the range between $0.01 and $40. Therefore, the minimum and maximum bets are $0.40 and $400 per spin.

A snow white husky is a wild symbol. It has three major features that makes it a very desirable picture to look out for:

A Free Games symbol can sometimes stop in any position on the first, third and fifth reels. If one or two appear, you get nothing. To launch a bonus, three of them must pop up in any position, at which point you get x2 times a total bet and 3 free spins. This amount sounds skinny but the bonus occurs fairly often. During free spins, occurrence of a scatter prolongs the feature by one extra free spin. If two or three scatters land during free spins, you get two and three extra spins, accordingly.

The slot has a basic pick to win bonus game activated upon hitting three Bonus symbols on the three middle reels. You are then shown three items marked with “?”. You must pick any one of them to reveal an instant bonus award that varies between x3 and x100 a total wager. With this in view, the top bonus prize is equal to $40,000 if you have made the maximum possible bet in the triggering base game spin.