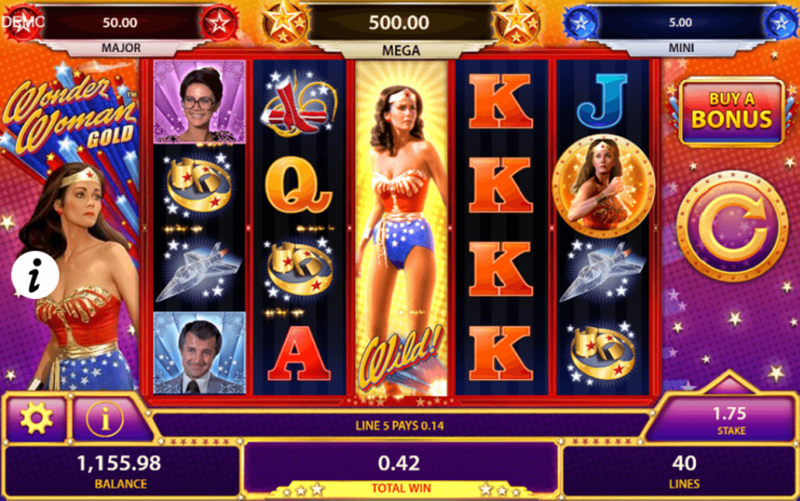 The game is inspired by Wonder Woman, a superhero series aired in the USA in 1975–1979 and based on a comic book. Speaking briefly, the heroine has supernatural powers that she uses to carry out missions, fight villains and protect the innocent. To the left of the reels, you will see Wonder Woman wearing a red and blue star suit, a tiara and a golden belt, which remind you of the original series. Feature-wise, the slot has many things to offer such as expanding wilds, 3 free game scenarios, mystery stacked reels and more. Finally, you can win one of three super jackpots if playing for real money.

The slot gives a realistic immersion into the series by using photographic images of the main heroine, Steve Trevor (her trusted friend and partner) and various accessories that she uses in the episodes of the series. For some reason, Bally did not put aside playing cards, although it would have been great if some more accessories based on Wonder Woman’s gear had been used. Anyway, the playing cards are bottom symbols with the highest payout $120 for five of a kind. Themed symbols include knee high red boots and a gold lasso ($120), a tiara and gauntlets ($120), an invisible jet ($160), Wonder Woman’s friend ($240) and herself ($600). The slot has 40 paylines and a total bet ranges from $0.25 to $200 per spin without any possibility to change the number of paylines, which are always fixed.

On top of the reels are three indicators displaying values for Mini, Major and Mega jackpots that are awarded if a respective star of blue, red or yellow color lands on reels 1 and 5. Jackpot amounts correlate to a bet amount – the higher a total bet, the bigger the three jackpots. Mini equals x20 times a total bet, Major is x200 and Mega awards x2000. If you play at the top bet and hit Mega, you will earn a huge $40,000. There’s also another rule expressly stated by Bally: The likelihood of hitting any jackpot grows with the money wagered.

At the beginning of each spin, any regular symbol is randomly picked to acts as a stacked symbol for that spin. When the reels are spinning, you can see three- or four-symbol long chains of the same picture. After the reels stop, chances are one or more reels are going to be covered fully or partially with like symbols. This enhances your winning chances and leads to numerous combos on any one spin.

A wild symbol portrayed by the WW red, blue and golden logo substitutes for regular icons but does not create its own combinations. It appears on reels 2, 3 and 4 only and expands vertically to cover the entire reel. Needless to say, expanding wilds will help you earn more, especially when combined with stacked symbols.

If three Wonder Women on the golden background make an appearance on reels 1, 3 and 5, you are dashed lucky because you are granted access to a free spin selection feature. On a new screen, you will be presented with three scenarios to pick from:

If you don’t want to wait for the scatters to hit on adequate positions, you can make use of the Buy A Bonus feature and pay money to get immediate access to free spins. You will then be offered to customize a free spins stake or refuse playing by pressing a related button in case you want to backpedal and return to the base game.

Wonder Woman Gold is a series-based online slot with 3 free spin scenarios, expanding wilds, stacked symbols and three jackpots, the top one being $40,000.