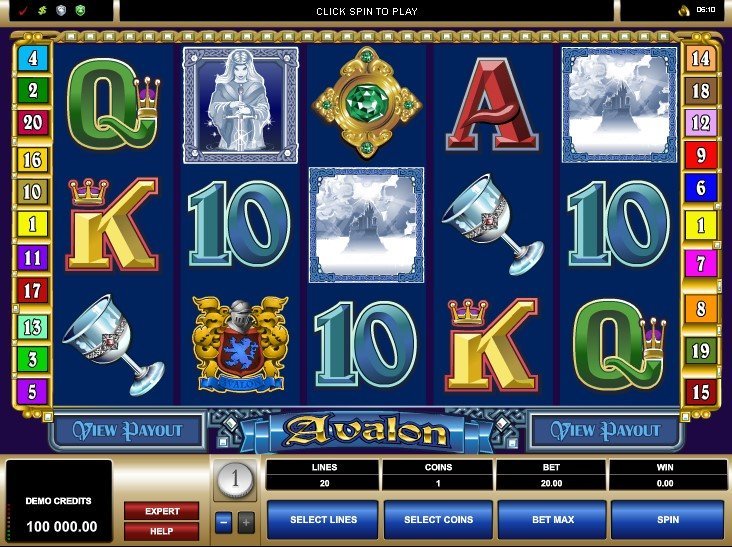 Paying tribute to the immortal legend of King Arthur and Knights of the Round Table, Microgaming have released this 5-reel slot that carries you back in time to see the glorious Arthur in his search for the Holy Grail. Some of the nice features here include free spins, a mystery multiplier of up to x7 and an extra wild symbol that, combined, can provide festive wins and entertainment to avid slot fans. The most lucky and persistent players will be bestowed with the $20,000 jackpot to be handed out by the marvelous Lady of the Lake.

Graphic design in the slot is simple, without artistic bells and whistles, and the five reels are located against a solid blue background. Symbols feature a kind of minimalistic design that feels a bit outdated, though there’s still some good win animation and a pleasant slow soundtrack. All symbols pay left to right, except scatters, and you need to hit at least three regular symbols to get paid a certain coin award.

A coin is presented in seven denominations varying between one cent and half a dollar. There are 20 paylines and you can select which number to activate. It is better to have all the set of lines in play but it’s up to you how many of them to place your bet on. Each line accepts 1 to 10 coins so the lowest and the highest bets are $0.20 and $100 on a spin.

There are five low-paying and four high-paying basic symbols in the slot. Playing card values from 10 through Ace award x5 to x150 ($750 at max). Other symbols are associated with Arthurian legends and appear less frequently on the reels as compared to playing cards. The payouts for theme-related symbols are x400 (Goblets), x500 (Gold Charms), x600 (Coats of Arms) and x800 (Crowns), all for five of each kind. Making some easy calculations, you can see that the top award that regular symbols produce is $4000. Bonus events and special symbols to be reviewed below provide a much higher payback.

The slot has two different wild symbols. Both substitute for regular icons but not all of them appear at any time. The first wild, represented by a castle in the clouds, has a universal use because it serves as a substitute in the base game and free spins. Landing five Castles on an active line pays off x3000 ($15,000 at max).

A chest is an extra wild symbol that appears in free spins only and increases your chances of hitting a win as it replaces other symbols. The Chest symbol is also able to complete its own combinations. Getting two to five of them awards x5 to x1000 (or $5000 at the maximum stake).

Lady of the Lake that appears at pivotal episodes of King Arthur’s life is also one of the most powerful symbols in the slot, since she pays in any position on the reels, not necessarily along a payline pattern. Five of these pay x200 a total bet, which is worth $20,000 if you play at the top bet.

Three or more scatters initiate 12 free spins and the feature can be re-activated if you manage to get 3+ scatters again during the feature. Free spins have a huge winning potential due to a mystery multiplier that becomes effective every free spin and varies between x1 and x7. Just imagine getting five wilds in a proper order, at a x7 multiplier!

Avalon is equipped with a familiar gamble feature that starts, unless ignored, after a winning spin. Choosing a correct color or suit, you increase your amount won by x2 or x4.