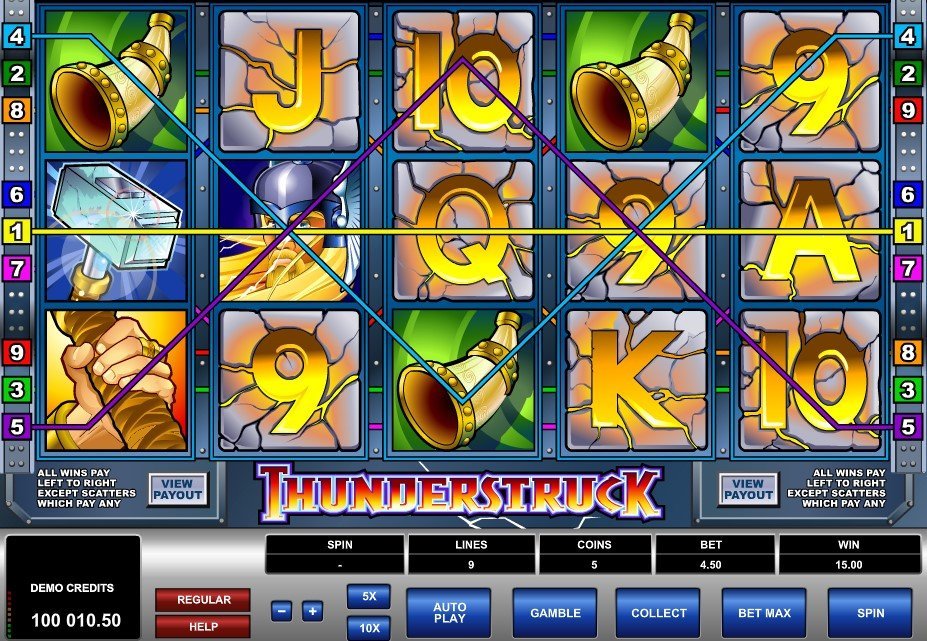 Slots themed around myths, legends and folklore tend to be big hits with slot fans, especially when it goes about Microgaming’s titles. Thunderstruck is inspired by Norse mythology and the powerful god Thor who is often pictured holding an enormous hammer in his hand. Take the trip of your life to Asgard, home of mighty gods, and bring home a fantastic 10,000-coin jackpot! Released over ten years ago and having simplistic design, the slot is still very popular with casino enthusiasts who are comfortable with unsophisticated graphics and like medium-volatility slots.

Thunderstruck is a 5-reel slot played over 9 paylines. As the slot has a mythological twist, its symbols fit the theme well and even playing card pictures look like made of liquid gold. There are six playing card values used in the slot (9–Ace) and they are traditionally low-paying symbols that award x2 to x125. Nines triggers coin rewards beginning at two-of-a-kind combinations, whilst other card symbols pay if at least three of the same occur. Other regular symbols include a hunting horn (x250), a lightning bolt (x250), Valhalla Hall (x400), Thor’s hand gripping his hammer (x750), and Mjölnir, the divine thunder weapon of Thor (x750).

To adjust a bet size, the bettor should use the buttons located under the game screen. Clicking +/- buttons increases or lowers a coin size between $0.01 and $1, and the Select Coins button is used to change the amount of coins per line (1 to 5). A total bet in Thunderstruck varies between $0.09 and $45, with the option to change the number of active lines; however deactivating paylines seems to be not reasonable since you reduce your winning chances dramatically.

Thor, the strongest deity in Norse mythology, serves as a wild symbol. This is arguably the most useful and sought-after symbol in the slot because of its ability to substitute basic symbols. Suppose you get three Valhalla images on a payline and a wild symbol on reel 4, all placed on an active payline. Instead of getting paid for a three-of-a-kind combination, the slot awards you a much higher win since the wild has replaced the lacking Valhalla image and thus created a 4-of-a-kind set of symbols. Another advantage of the wild is its inherent multiplier of x2 applied to all combos in which it substitutes.

The wild Thor symbol stands out from the rest in that it offers a $50,000 jackpot for five wilds gathered on a payline. This magnificent income will be all yours if you have wagered the maximum and hit the jackpot combination. Whatever the case is, five wilds pay out x10,000 a line bet so playing even at the minimum nine-cent bet you will manage to grab $100 for that combination.

Two of Thor’s rams who were believed to pull his chariot are scatter symbols. While all basic images need to be positioned in payline formations to award a paytable prize, scatters pay when collected in any place. Two to five of them pay x2 to x500 a total spin bet, which is equivalent to $22,500 at the maximum possible outcome.

The scatters are not only excellent profit boosters. Three of them present in any position will be enough to trigger a free spin bonus. You are awarded 15 free spins that come at no cost for you, and all winnings during the feature will be multiplied by x3. Free spins can be re-triggered.

After a successful spin that brought you a win you can see a Gamble button among other controls. Clicking it opens a gamble feature where you have to guess a color or suit of the facedown card. A correct pick will result in doubling or quadrupling of your most recent win.