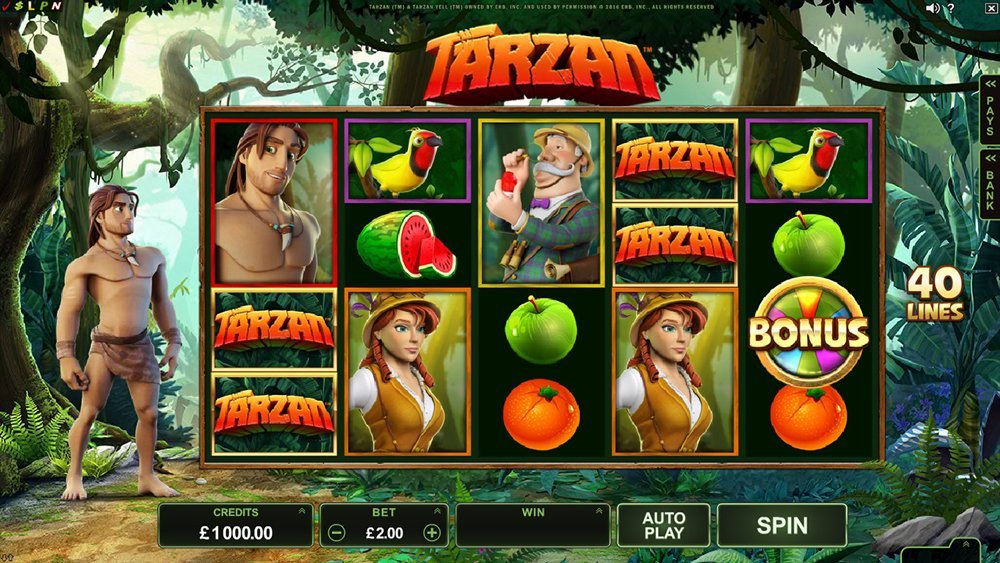 Tarzan is a visually stunning video slot which was released in December 2016 for desktop and mobile play. It features astounding 3D graphics , a marvelous background of lush jungles and waterfalls, and lots of lucrative on-reel features such as rolling reels, big symbols, stacked wilds and a brand-new Growing Wilds feature. You will submerge yourself into Tarzan’s world thanks to his remarkable ululating yell sounded as you play the slot and breathtaking animations as Tarzan celebrates your winning spins.

Tarzan has an unusual configuration with 5 reels, 4 rows and 40 fixed paylines, and the theme is inspired by the titular literary character created by Burroughs. With its outstanding cartoon graphics, the slot in some way resembles a short animated cartoon where the gamblers are actively involved in Tarzan’s adventures and seek out hefty wins. Symbols used here include Tarzan’s friends, cheetah, chimp and four different fruits, all rendered in high-end crisp graphics.

Bet amounts are very flexible and are adjusted between $0.4 and $40 per spin. As you cannot change the number of paylines, you always play with 40 of them active. There are ten regular symbols and all create combinations when at least three are collected on a payline. Fruits are lower paying pics that award up to x80 ($80 at max). The top two payouts generated by regular symbols are $500 (five Tarzan images) and $450 (five Jane or Professor Archimedes pics). Since the slot has 4 rows, there is more space for winning combinations on the screen so you will often experience plenty of wins on a single spin. And you have a strong chance of ending up getting much more due to superb on-reel features.

Every symbol normally occupies one position so each reel contains four symbols. But in this slot, all character pictures (Tarzan, Jane and Professor) are of two sizes each, in a regular and bigger version. The smaller symbol version fills one position as other symbols usually do, while the bigger pictures occupy two places on a reel. If a big symbol lands on a reel, it is actually treated as two usual symbols, thus improving your winning chances.

Wild symbols are represented by the slot’s logo and they always come in groups during a base game and free spins. Furthermore, wild substitutes can complete their own combinations paying off x800 for five of a kind. Stacked symbols, especially wilds, have a dramatic positive effect on the overall payout rate of the slot and you can expect higher and more persistent wins with wild stacks.

The most intriguing and fruitful feature is triggered by three or more scattered bonus wheels. These scatters are totally valid regardless of their stop position on the reels. Just get 3+ in any place and get ready for big bucks! Before the feature starts, you first get a scatter win that depends on your total bet (up to x100 for five scatters), and placing the maximum stake will produce $4000, which is the slot’s largest jackpot amount.

The Bonus Wheel is divided into 10 sections marked with different prizes. The wheel is spun up and then it stops, showing your award. If the arrow on the wheel points at a multiplier value x3 to x6 (the most typical outcome, by the way), you get a cash prize. A jackpot, another possible prize, is always fixed at x200 the original stake or $8000 at max. Other winning possibilities include free spins and a bonus game.

You get 12 free spins with Microgaming’s signature Rolling Reels and unique Growing Wilds feature. Those of you who have played video slots of that provider, might be familiar with the rolling reels mode that activates after a winning spin – symbols involved in winning combos disappear and leave spaces, which are filled in by new symbols and lead to multiple consecutive wins.

The Growing Wilds feature is truly groundbreaking and is very rarely used in other slots games. As you recall, wilds are stacked and the number of wilds that follow on top of each other in a stack is constant in a base game. In free spins, a continuous chain of wilds increases by one wild each spin and reaches 15 by the end of a free spin bonus.

This is a pick-and-win bonus game played on a new screen. You will see 12 hippos and are offered to pick as many of them as possible until your selection reveals the Pop! message that ends the feature. Hippos award random cash amounts.