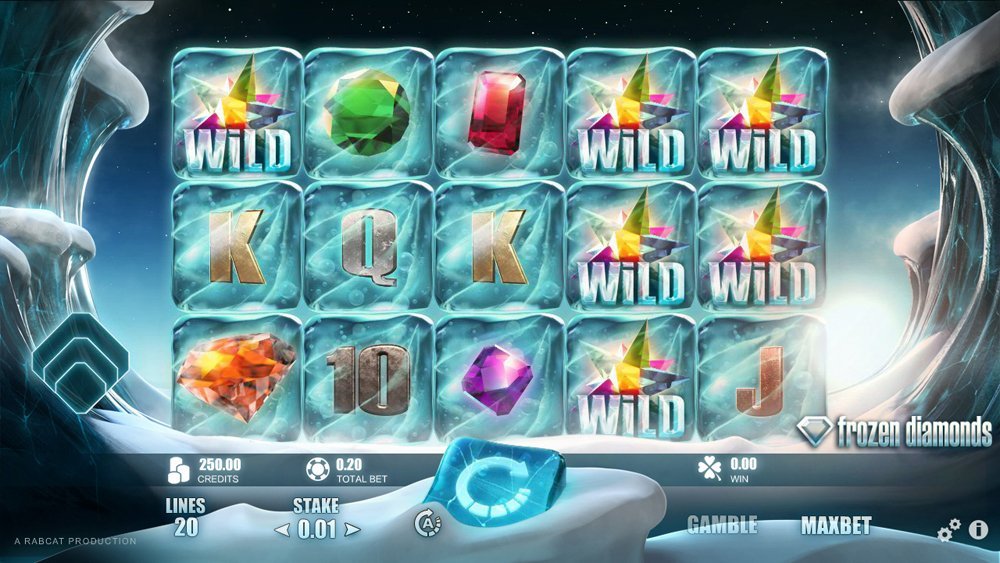 Frozen Diamonds is a visually-rich slot with five cascading reels, free spins, bonus falls and other interesting features. Symbols are designed as big transparent ice cubes and the entire background picture depicts a landscape that can be found on some ice cold planet. This engaging and truly spectacular video slot has fantastic special effects, superb 3D graphics and a beautiful gamble feature. Glistening gemstones inside winter ice will bring you up to $2000, while stacked wilds are going to reveal lots of sparkling wins.

The five columns of symbols can hardly be called ‘reels’ just as they normally are in other video slots. Instead of rotating down in a vertical direction, the symbols tumble from above the screen and arrange themselves in a 5×3 configuration.

The user interface is a bit unusual as compared with other slots from Microgaming. A massive ice cube at the center marked with a round arrow is a spin button, while Autospin settings are available by clicking the “A” button. A bet size is adjusted by using graphic arrows that change a line bet from $0.01 to $2, and this is the only option available for betting purposes. As the slot has 20 fixed paylines, the minimum and maximum bets are $0.20 and $40 per spin. There is also the Max Bet button and clicking it does not cause the reels to spin automatically, unlike many other of Microgaming’s titles.

All symbols are encased in ice blocks and include four playing card values (10, J, Q and K) and four shining gems of different shapes and colors. The top three payouts in the slot are $2000 (five wilds or orange gems), $1200 (five green gems) and $800 (five red gems). Payouts seem to be modest but an exciting Bonus Falls feature makes up this shortfall by providing more winning opportunities.

Wild symbols often appear one by one, making a continuous chain of three symbols. If this chain appear on any column (reel), you will get two or three wilds simultaneously. This is especially profitable when the wild stack lands on reel 1 or 2. Wilds are used to substitute basic symbols and they also pay on their own. Hitting five wilds produce the slot’s largest prize of x1000 times a bet.

The idea behind the Bonus Falls concept is similar to rolling reels used in other Microgaming’s products. Once symbols create a winning combination, a ray melts down the ice and you receive a winning amount according to the paytable. The released symbols crack, explode and disappear, leaving empty spaces. New ice blocks with symbols tumble down into the empty gaps and if another winning combo occurs, the related cash prize is again paid to you, the contributing symbols disappear again and the third (last) bonus fall begins. A diamond-shaped indicator to the left of the reels displays how many subsequent wins you have had.

After three consecutive bonus falls you are awarded 5 to 10 free spins. During the feature, the central reel will always have randomly two or three wild symbols on it. Achieving a winning combination as a result of the second bonus fall, you will earn one extra free spin that comes with a multiplier of x2 and a full stack of wild symbols on the third reel.

The unique gamble round fitted to the theme gives you another chance to extract gems from ice and increase your winnings. On a new screen, you will be presented with two ice cubes filled with orange and purple mist each. The cube of your choice cracks open and reveals either a diamond or nothing. A successful pick doubles your winning in the preceding base game.