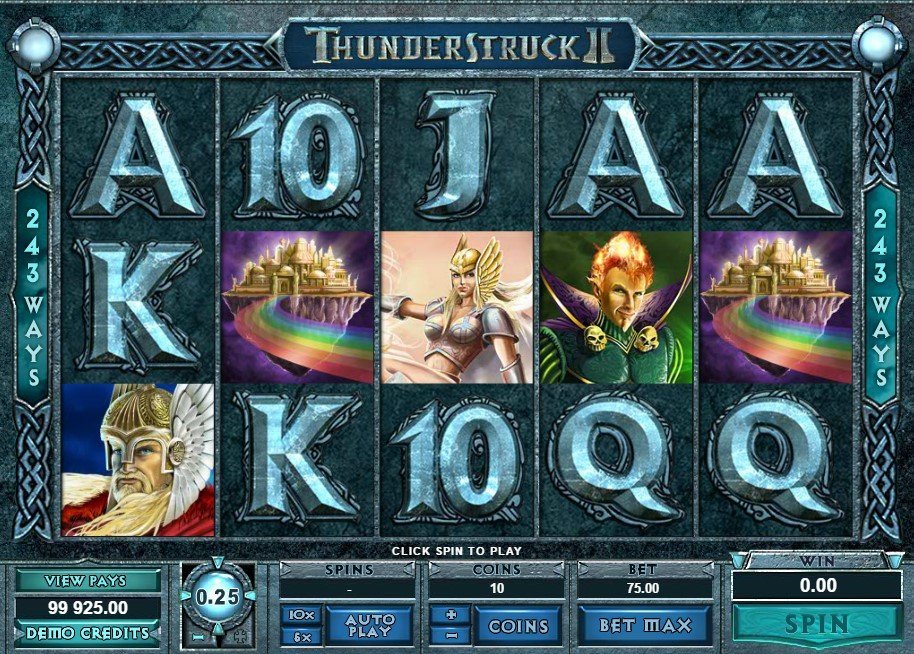 After the successful launch of the first Thunderstruck slot that received much acclaim with regular online casino users, Microgaming released a new version of the slot to be reviewed hereunder. Thunderstruck II is based on a totally different slots engine but its theme remained unchanged. There is still Norse mythology in the focus but the second, revamped version has more gods on its reels, uses a 243 ways system and offers a feature-rich Great Hall of Spins that unlocks gradually as you play. Online since 2010, the game still sweeps all before one.

Thunderstruck 2 features five reels, three rows and the minimum bet of $0.30 per spin. The 243 Ways model means that no paylines are present and winning combinations are completed by identical symbols that stop on neighboring reels beginning with reel 1. Coins have only three values; $0.01, $0.02 and $0.05, and the number of coins is 1 to 10, so the game would fit players who like low bets and low-risk gambling style.

Playing card icons designed as if carved of stone pay x5 to x150 for three to five of the same. Themed symbols include a Viking ship, Valhalla castle, Valkyrie, Loki, Odin and Thor. As you can see, only the mythology-related images are put into play and this creates a great atmosphere of Norse legends and myths brought to life in this slot.

The top three payouts generated by regular icons are $250 (Thor), $225 (Odin) and $200 (Loki). Well, the prizes are less than you could expect but keep in mind that most spins end up featuring more than one winning combo and the rewards for them are added to give a good total sum. Besides, regular payouts are just the top of the iceberg as to what the slot offers.

Thunderstruck II logo is a wild that substitutes basic symbols and doubles payouts when substituting. Five wilds hit left to right pay x1000 or $500 at the maximum bet.

And here comes the most exciting part of the slot’s bonus content, the Great Hall of Spins. This is very much the same feature as used in Microgaming’s Immortal Romance and it provides lots of extra bonuses and features all the way as you advance along the bonus progress bar. To enter the Great Hall, you need to spin in 3+ Bonus Hammers. Then, you are awarded a free spin mode based on your overall progress:

If more than one bonus has been unlocked, you are allowed to choose between available bonuses and decide yourself which one you want to trigger after you have entered the Great Hall. This intensive bonus feature has a huge win potential of over 2 million coins. The player’s current progress is logged in after leaving the slot so the bonus bar will be on the same level without your having to start it from scratch.

This is a small but very lucrative addition to the overall collection of features available in the slot. It can activate randomly in a base game and turn up to five reels into wild.