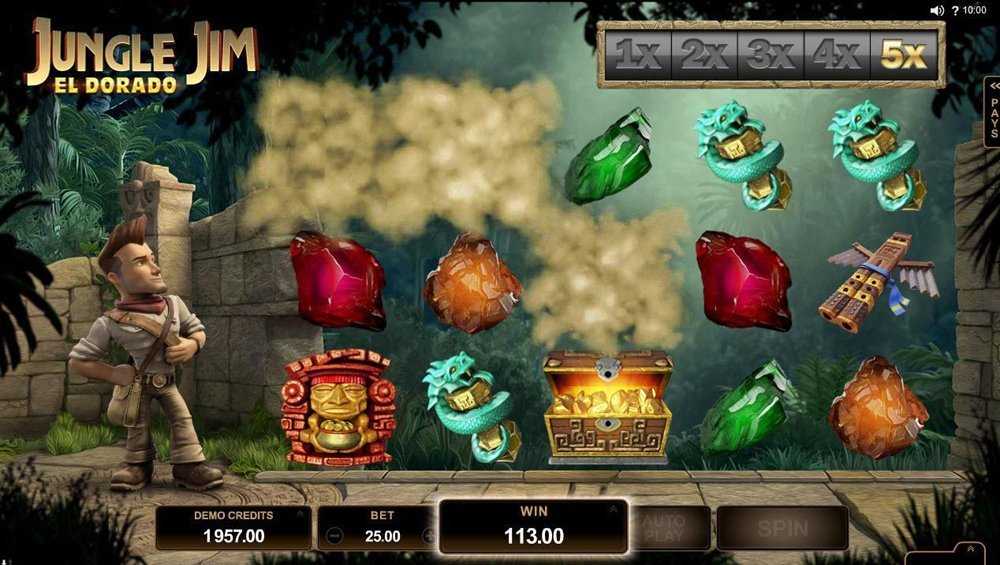 Jungle Jim El Dorado is an adventurous slot with brilliant 3D graphics and high-end special effects. Featuring 5 reels and 25 fixed paylines, the game has a plenty of benefits to offer including a wild symbol, a multiplier trail, rolling reels to name but a few. On every subsequent win you get a multiplier rising up to 5, not to mention the coveted free spins with giant prizes up for grabs. Get transported to the past and explore South American jungles in search of El Dorado and its immeasurable riches – a 920,000-coin award is waiting for intrepid adventure seekers!

Microgaming launched the slot in September 2016 making it playable on desktop and mobile devices. Graphical appearance in the slot is excellent – Jim himself is always standing to the left of the reels, accompanying the reel action with different moves and gestures. The background scene behind the reels shows a piece of rainforest and makes a really good impression, considering ‘loose’ symbols that have no visible frames between the reels, thus they do not obstruct a great view of the background jungle. Design-wise, the slot is nearly perfect.

This Microgaming’s product has 25 non-adjustable lines that are always active but you still have two options to adjust to choose your comfortable bet amount; a coin denomination (up to $0.10) and the number of coins per line (up to 10), therefore the minimum and maximum wagers are $0.25 and $25 per round – a fairly small range that ignores high-rollers’ betting habits. The most crucial distinction of Jungle Jim El Dorado is that its symbols fall, not spin, and this adds some diversity.

Symbols include more or less themed icons that are commonly associated with richness and the Aztec civilization such as four different raw gems, a totem pole, tribal figurines and a chest full of gold. Raw crystals pay x3 to x100 whilst the themed pics award x15 to x3000. Every winning combination contributed by regular symbols must contain at least three identical symbols on a preset payline in order to generate a win. The top three payoff are $3000 (five chests), $1000 (five red and golden figures of a deity) and $500 (five azure snakes twining around a piece of gold).

Above the reels there’s a five-sectored indicator showing five values from x1 to x5 in the base game. This is known as Multiplier Trail that shows your current multiplier value applied to your current spin. Every time you press the Spin button, unless you have activated the autospin feature, 15 symbols fall down and get arranged in a 3×5 grid. If any winning combo happens, you get a reward for that combination (or more than one combination), the involved symbols disappear and a new fall of symbols occurs. At the same time, the multiplier value on the indicator increases by 1 and does so on every subsequent win until a no-win fall of symbols happens in which case the Multiplier Trail resets to its starting value of 1.

The wild here is presented by the Jungle Jim round logo that stands in for basic symbols. It appears in any position without any limits but it cannot create its own combinations.

A round artifact that resembles an ancient measuring device for astronomy is a scatter symbol that appears on reels 1, 2 and 3 only. Three of them pay x5 times a total bet and activate 10 free spins. Basically free spins are played in the same manner as the base game with two fundamental differences – first, you get these spins for free and; second, the numbers on the Multiplier Trail are much higher. Any initial spin comes with a multiplier of x3, and every consecutive win increases by 3, so after the fourth roll you will enjoy a breath-taking multiplier of x15 subject to all of your prizes in the winning streak! Thanks to this highly rewarding solution, the potential win in free spins runs into $92,000.