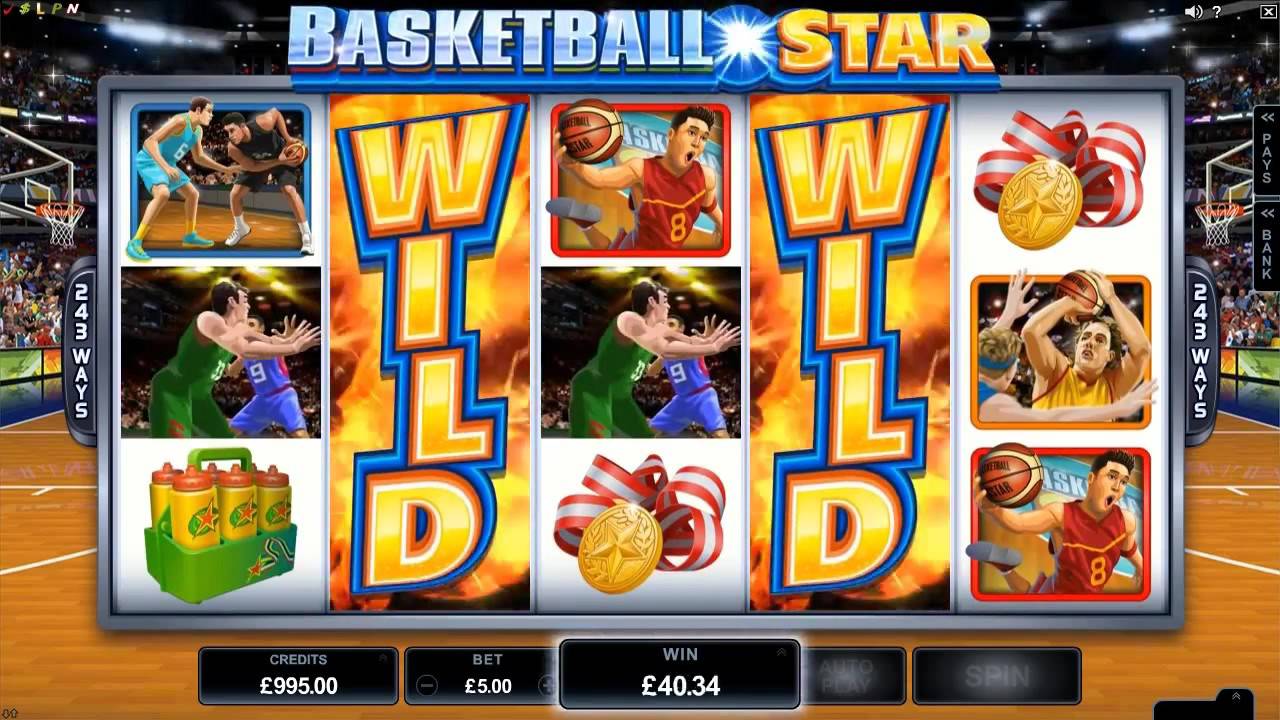 Masterminds of Microgaming have rolled out a series of sport-themed slots that have pretty much identical features and Basketball Star is one of them. Not only basketball fans are going to love this slot but also a broad audience of slot enthusiasts who take interest in feature-packed gaming solutions. Rolling reels, stacked wilds, accumulating multipliers and other splendid bonuses are in abundance here, say nothing of the chance to grab $120,000 in free spins. Give it a whirl and you will definitely find this slot rewarding, exciting and worthwhile your time.

Most slots of today have a certain number of paylines that first need to be activated and then covered by a specific combination of symbols in order to get an award. In this slot, an alternative design is used, known as ‘243 ways to win’. Pursuant to this system, winning combinations are considered to be completed when three (sometimes, two) or more of the same pictures appear on line 1, line 2, line 3 and so on, consecutively, without any gaps in reels.

This approach gives rise to two important implications: first, winning combos are created more frequently and; second, winnings are smaller than they tend to be in traditional payline-based slots. As there are no paylines, the minimum bet cannot be one cent – it is worth $0.50 in Basketball Star. By changing the number of coins and their value, you can modify a bet and increase it to $50 per spin.

There are nine regular symbols in the slot that portray basketball accessories and players performing different maneuvers. The top award given away by low-paying pics is just $120 (five Gold medals), while five basketball players in a red jersey pay off $600 at max. These are not very big payoffs, without doubt. However, you will often see winning combos landed on the screen, especially these completed with the help of wild symbols. Basketball Star is a typical low-variance game with low but frequent payouts.

A wild symbol is depicted as the Basketball Star logo on the fire flaming background. The wilds do not form their own combos but that’s okay, as it always comes stacked on reels 3, 4 and 5. This means that almost every spin ends in several wild symbols being on the screen at a time, which further means more opportunities for beneficial combinations.

Besides, the slot has another feature that involves the wilds. At any time during the base game, up to 2 reels (reels 2, 3 or 4) will become fully wild with a guaranteed win. This is a perfect addition to the already profitable wild card!

Another profit-boosting feature that is sometimes used in Microgaming’s slots is known as Rolling reels. It works as follows; every time a winning combination is formed, you are paid out, the symbols that make part of it explode and disappear, and the empty spaces are filled in by the pictures falling from above. Consequently, these new symbols can result in new winning combinations. The ‘rolling reels’ cycle continues until a new shift brings no more wins.

A basketball is a scatter symbol, with five of them paying the jackpot prize of up to $12,500. Scatters pay out when they land in any position, unlike regular pics that need to stop on adjacent reels to pay. Three or more basketballs start 15, 20 or 25 free spins in which rolling reels are complemented by a rising multiplier that goes up after each consecutive win. As a result, a multiplier can reach the maximum value of x10 and provide truly giant wins.