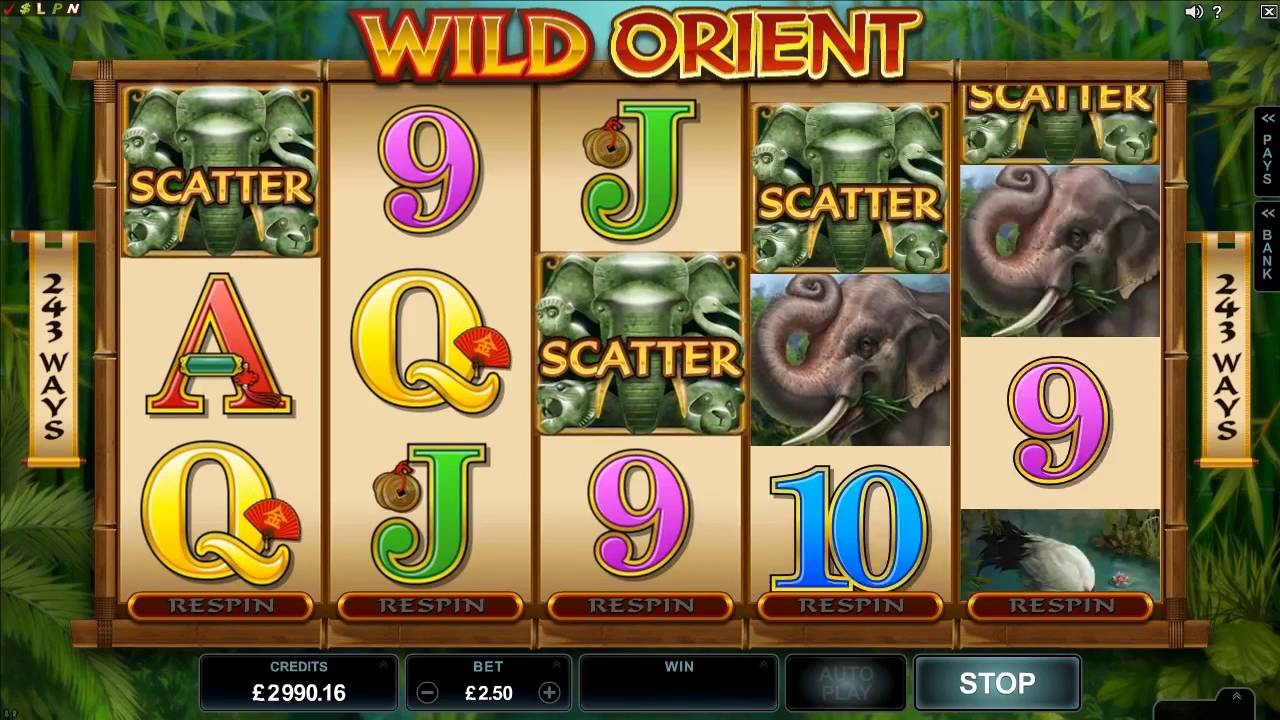 Want a second chance after a no-win spin? Then give a try to Wild Orient, a five-reel slot released by Microgaming. It proudly presents a beneficial Respin feature that allows for spinning again a needed reel with the chance of hitting a combination. The slot takes you to the habitat of animals that live in Asia including pandas, Bengal tigers and Asian elephants, and provides an opportunity of scooping a healthy $20,000 jackpot. Take a trip to this mysterious continent and enjoy its impressive features, impactful graphics and a fast-paced gameplay.

This Wild Orient video slot is almost an exact replica of another Microgaming’s solution titled Bikini Party. They have different symbols and themes but their mechanics is the same, with 243 ways to win, respin feature and payline structure. So if you find Wild Orient suiting your play style, consider playing the summer-filled Bikini Party.

In a nutshell, the 243 Ways system gives 243 probable ways of creating a winning combination. You do not need to worry about landing some symbols in preset formations – just get three or more matching symbols on adjoining reels, continually from the leftmost reel further to the right. This reel design solution stands out for its ability to form more payable combinations at a time, as compared with many payline-based slots.

Regular pictures in the slot are grouped into two categories; The first includes playing cards from 9 to Ace, which are low-paying symbols with the maximum award of x200 for five Aces. Actually, they will often accompany your gaming and appear in a correct, qualifying position. Symbols in the second category pay higher and they are a heron, monkey, panda, tiger and elephant. The top $20k jackpot is awarded if you collect five elephant images on the reels. Other animal symbols are also beneficial for your bankroll bringing you x10 to x2500 or $12,500 at max. Betting options in Wild Orient are a coin size ($0.01–$0.50) and the amount of coins (1–10), which makes the min/max bets of $0.25/$125 per round.

Suppose you get four elephants on all reels other than reel 5 and so you win x400 a line bet. If not for the missing elephant on the fifth reel, you would have grabbed the grand jackpot which is ten times higher than the four-of-a-kind combination for these symbols. Fortunately, the slot has a respin feature that will help you try to land the targeted symbol on the required reel. It works simple; a Respin button appears under each reel after the reels have stopped spinning. A respin has its own price calculated for each reel individually with a glance to the bet size and the value of a winning combination that may form as a result of that respin. If, as in the above example, you need a missing elephant on the fifth reel to get five of a kind, the respin cost for that reel will be very high.

The wild represented by the slot’s Logo is aimed at substituting for regular symbols. It is not a very potent icon in the slot because it appears on reels 2 and 4 only. Consequently, the wild has no ability to pay for itself, independently of other symbols.

The Elephant Statue image with the word ‘Scatter’ pays scatter wins, meaning that it will be useful in any position. Five of them give away x100 times a total stake or $12,500 at max, whilst three scatters are sufficient to unlock a free spin bonus in which all wins are tripled. The slot always awards you 15 free spins and they can be retriggered under the same starting conditions.