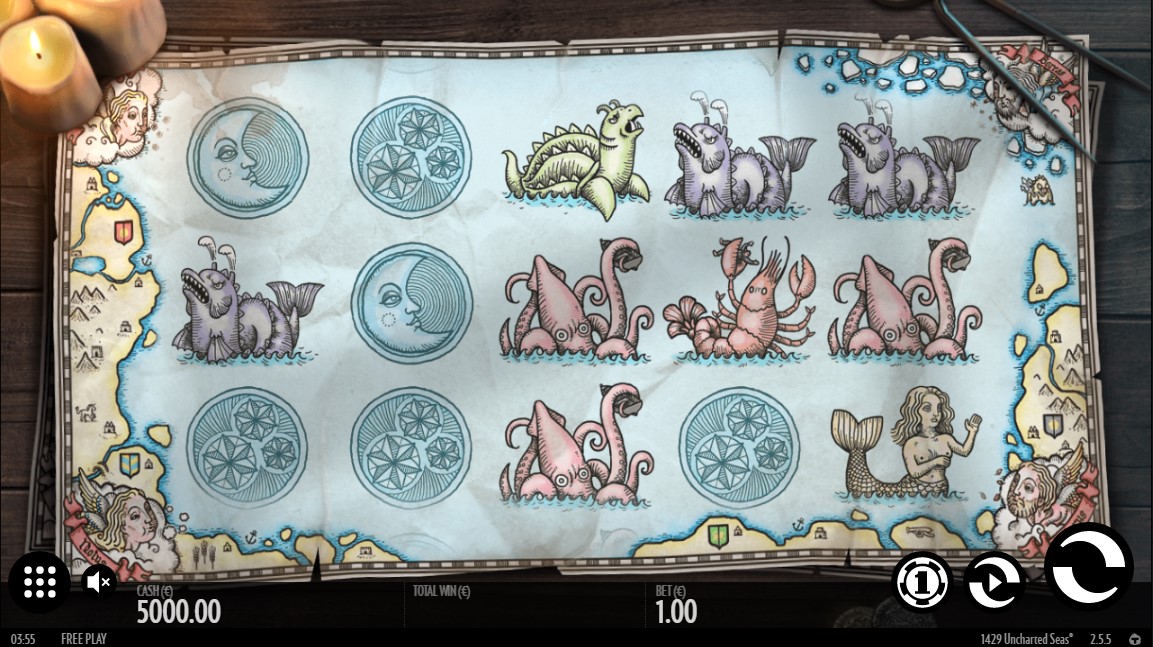 This Thunderkick-powered slot with 5 reels, 3 rows and 25 paylines is devoted to times when Christopher Columbus was not born yet. The 15th century was the era of explorations. Seafarers set sails to discover the new lands of promise through dangerous seas and terrible storms, often mislead by imprecise maps and fearing underwater creatures who could take down a vessel. You will benefit from creatively developed expanding wilds and 50 free spins that would make your journey an enjoyable experience.

History and adventures are popular themes as they provide tons of ideas and plots for slot designers. The current slot released by Thunderkick has an unusual appearance and looks like a big world map with rude coastal outlines reflecting shortage of geographical knowledge at those times. Dark shadows are floating across the reels as if you are on a ship rolling in the waves. The gaming screen resembles a medieval map charted by hand and depicting an ocean with creatures that were thought to live there including a mermaid, a giant octopus that dragged ships into the sea and other monsters. The symbols are very intricate and detailed, mimicking real drawings on the maps in the Middle Ages.

There are eight regular symbols and two special ones. The latter do not pay out anything but they have some bonus attributes that facilitate winning. The bracketed values below indicate the maximum possible prize provided by five like symbols. Regular symbols include wind roses ($300), moon ($300), sun ($300), a purple toothy monster with fins and long wattles ($600), a huge red lobster with its claw clipping in the air ($600), an octopus ($1000), an enormous turtle ($1000) and a mermaid ($5000). It is worth noting that combos are completed when three or more of the same symbols appear on a payline.

The number of lines is not adjustable and neither is a coin denomination. The only bet setting is a total stake per spin that starts at $0.10 and goes up to $100 with about ten available bet sizes in between.

An elegant sailing ship is a wild symbol that replaces regular symbols when it is possible to complete a combination. The symbol is designed with a great creativity. When it appears, a big sea monster raises the vessel with its tentacles and makes it an expanding wild that covers the whole reel. The wild is found on reels 2 to 4 only but it can boost your earnings after it has turned into an expanding symbol.

In this game, a compass symbol will always point out to you where treasures are. But to choose your direction of travel wisely, you need three compasses at the same time. When you do get three of them scattered on the reels, the ship will be caught in a lightning storm, the wind will fill the sails and the sunny day will turn into dark. You will be granted 10, 20 or 50 free games based on how many ships were in the base game. Free games can be retriggered likewise when you’re already playing free games.

This is a visually impressive video slot from Thunderkick. It has an unusual reel layout and good-looking marine-themed symbols that replicate the medieaval sketchy style. The features are expanding wilds and a variable number of free spins. Max. jackpot is $5000.