Birds on a Wire Slot

Play Birds on a Wire Slot for free 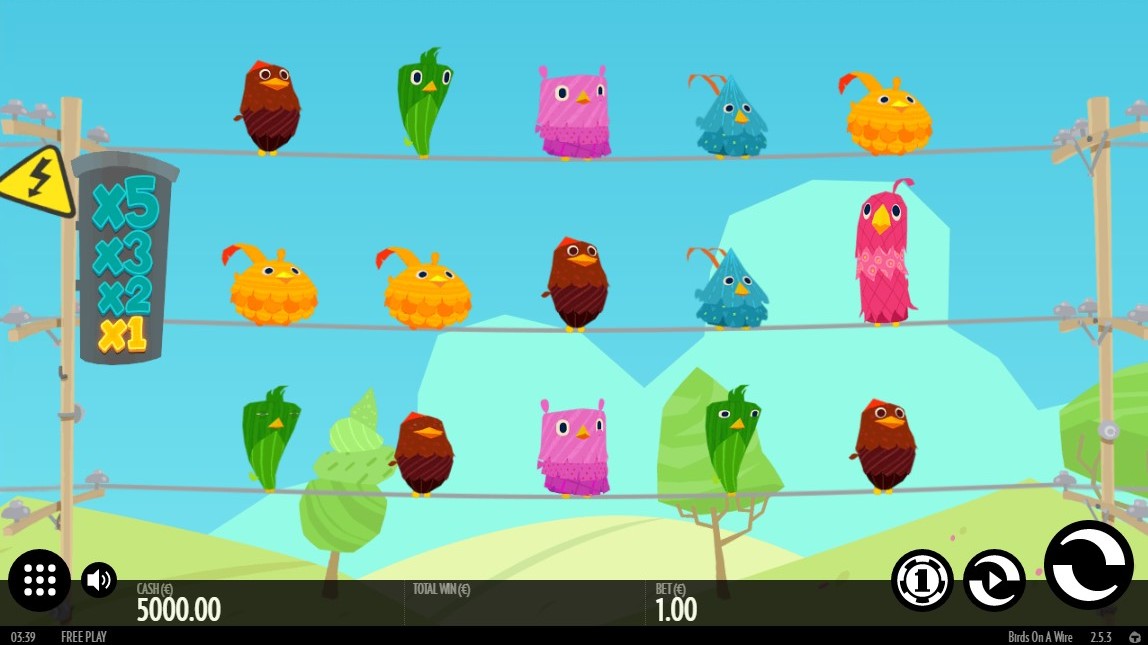 Birds on a Wire Slot Review

The Thunderkick company is known to produce strange looking slots. Imagine a flock of pink, orange and blue birds perching on wires. In real life, birds sit on power lines without getting shocked but in this slot they are electrocuted when part of a winning combination. Looks funny, yeah? Well, if it’s the strangest thing you have ever seen and you like quirky stuff, then look no further. Don’t worry, the game is not a gore but it’s really fun and a little unexpected for a slot to animate winning symbols like that. Join and have access to the following features: a wild, Dropping Symbols, cumulative multipliers, free spins and more.

15 birds are sitting on three wires, 5 on each. There’s not a slightest hint of this being a slot game because of no reels that you got accustomed to. The game screen displays some locality with trees and hills and three wires stretched between two power poles. Resembling Christmas balls, birds are drawn in a cartoony, blank style with very few details and simplistic depiction. When the Spin button is pushed, the 15 birds take wing and fly away, and the new 15 birds fly in and perch on the wires. Technically, the slot has 5 reels, 3 rows and 17 fixed paylines.

There’s another outstanding element to the left of the seated birds. This is a multiplier sign and it shows four values during base game: x1, x2, x3 and x5, one of which is always highlighted to indicate the currently applied multiplier. The birds creating a combination get shocked, flash rapidly and explode leaving a few feathers. If there are “live” birds above the affected ones, they drop onto the lower wire and new birds fly onto the vacant places from the outside of the screen with the chance to make a new win. With every drop, the multiplier shown beside is increased by one level (see above), and this continues as long as new winning combos are created. You are certainly familiar with this feature if you have played NetEnt’s or Microgaming’s slots where this is known as Rolling Reels or Cascading Reels. In the reviewed slot, this replacement is called Dropping Symbols.

Bets are available in 14 values starting at $0.10 and up to $100. There are seven kinds of birds, all awarding if three like symbols align on a payline from left to right. Payouts certainly differ based on the total bet, and the top three rewards that regular symbols pay are $600 (green birdies), $800 (pink ones) and $1200 (brown ones) for five birds of the same type.

A big black plum-shaped bird, which is much fatter than its friends, is a wild. Whenever it lands, it substitutes for other birds and helps them create combinations. Three or four wilds do not pay out but five do. Getting five awards x200 a total bet or $20,000 if wagering the maximum amount.

A cunning cat goes to any lengths to catch a prey. Here a curious black cat has gotten into a paper back and lurks inside to snap a heedless bird. The cat is a bonus symbol and scatter. Get three of them to win 10 free spins and each additional cat in bag gives two additional spins, with the maximum of 34 in total. During free spins, the multiplier ladder and Dropping Symbols are present, too, but the multiplier values are much greater, at x4, x8, x12 and x20.

This is not a typo, the feature is called Inwinity Spins. After free spins have ended, a yellow infinity sign emerges over the reels with the phrase “Spin until you win” and your bonus spins keep on playing until the first win, at which time you return to base game.

One-of-a-kind cartoon style graphics, an uncommon theme and nice symbols make the slot worth playing at least for some time. Fun is added by intriguing features such as Dropping Symbols and Inwinity Spins.