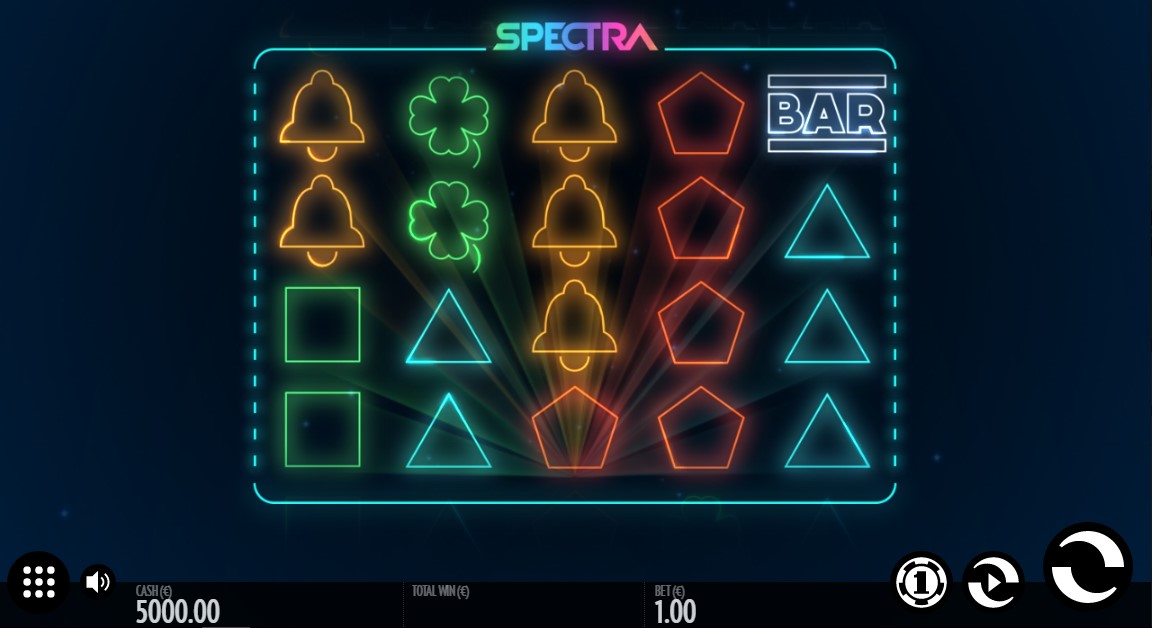 Spectra is a 5×4 video slot with 30 paylines, offbeat graphics and lots of wild symbol action. The slot is full of neon light and most symbols are designed as simple 2D geometric shapes but the whole gameplay is more sophisticated than it seems on the surface. You have a stacked wild symbol that nudges itself to the direction of the center to occupy as more symbol positions as possible. And you will enjoy highly profitable respins that can potentially grant you up to $200,000 at the end. Spectra is an out-of-the-box game that is not to everyone’s taste. Give it a spin and make up your own mind.

The gaming field consists of 20 symbols constantly on display. You will come across lower-valued icons including a dark blue circle (x1.4; payouts in brackets are given based on a total bet for five like symbols), a light blue triangle (x1.6), a green square (x1.8), a pink rhombus (x2) and an orange pentagon (x2.2). The other four symbols are a clover leaf (x3), a bell (x4), a red seven (x7) and a BAR (x10). Just to recap, all the symbols are drawn in outlines, they are just fluorescent silhouettes and are not filled in with color. The simplicity will be a little strange for some because video slots tend to have more picturesque symbols.

Any given symbol is often grouped in two or more in succession. This feature is called “stacked symbols”. You’ll often come across the like symbols filling the same reel, which is very beneficial for you and leads to generous payouts.

In Thunderkick slots including Spectra, there is one single option to adjust. This is a total bet per spin that varies between $0.10 and $100. The number of paylines is not changed and neither is a line bet.

A letter “W” drawn in all colors of the rainbow is a wild symbol. It always appears in stacks of four and is able to create combinations by itself if five of them cover a payline. In this case, you get x20 a total bet ($2000 at max), which is the highest win in Spectra. The wild assists all other symbols complete combos that would win you a prize. As soon as you get a group of wilds on a reel, a respin is triggered immediately. The wild stack stays in place and the remaining symbols set into motion. After the respins end, chances are you get one more wild stack, which will grant you one more respin.

This feature resembles the one available in some classic 3-reel slots but is rarely used in 5-reel games. During each respin initiated by wild symbols, the wild stacks are nudged up or down towards the center of the reels in order to appear in full, if possible. That means you will mostly have all the four positions occupied by wilds.

Spectra is a 5-reel 4-row slot that has stacked wilds as its key feature. Wild symbols nudge to cover as more reel space as possible, and start one or more respins. Given the low minimum bet of $0.10, the slot will appeal to low-rollers. The max possible win in the slot is $2000 with the huge maximum potential win of $200,000.