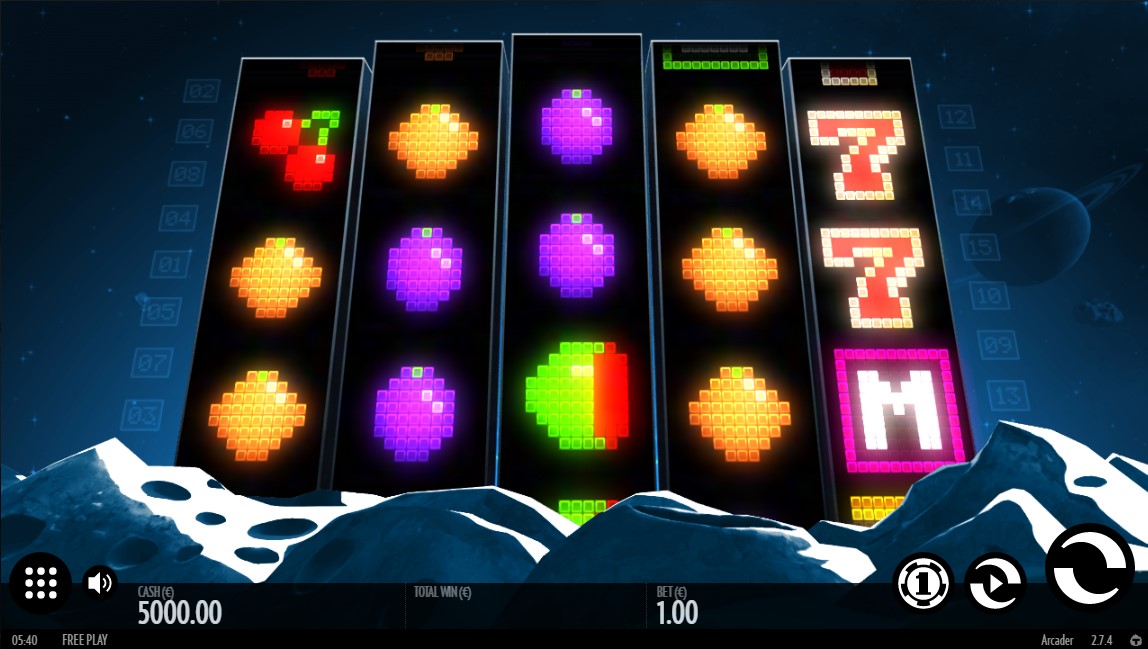 Thunderkick developers position themselves as a highly creative team with lateral thinking and creative approach to the established trends in slot-making. Arcader is an absolutely outstanding slot that stands miles away from the beaten tracks in the online casino industry. It does have a 5×3 field and common payline structure but the design looks like a visitor from the 80’s – as if someone had taken a very old slot machine equipped with a video screen, big pixels and retro sound effects, and digitized it into a video slot forgetting to update the far outdated slots elements. As for features, they are awesome and are able to entertain even finicky gamblers.

Imagine a moon’s surface spotted with craters, and tall sound speakers standing on it. That’s how the reels of the slot look like. Arcader was made with retro style in mind and its symbols are deliberately broken up into big pixels like overenlarged small symbols. The symbol set incorporates cherries ($100), oranges ($150), plums ($180), lemons ($240), watermelon ($300), bells ($360), sevens ($900) and Bars ($2000). Because of heavy pixilation, they have a distant resemblance with retro symbols but slot fans will feel reminded of plums, cherries, etc. by these pictures. The dollar figures in brackets display maximum payouts for five of a kind.

The reels are arranged into a familiar five-reel grid with 15 permanently active paylines. Bet sizes do not correlate to the number paylines, for example, the minimum spin bet is $0.20, which looks unusual considering the number of lines. The max bet is $100, which can be suitable for some high rollers. Before reviewing special features, it’s best to begin with stacked symbols. Every regular symbol can appear stacked, occupying two or three positions on a reel. Understandably, a stack contributes to winnings much better than any single symbol.

This is a unique feature developed by Thunderkick. It works similarly to the expanding symbol concept but has an exciting distinction. First off, it is represented by a two oppositely directed arrows that can appear at any place. Second, the slot software calculates which symbols would create the highest paying combination on that reel. After that, the Expander symbol turns the entire reel into three like symbols that the player would benefit best. This sophisticated feature can lead to big-time wins.

A Wild symbol is a white letter “W” with a bright blue frame around. Its properties are:

A framed letter “B” is a bonus symbol and a scatter. Three of them located in any place are required to trigger a trivial but very useful bonus feature. You are awarded 9 free spins no matter the number of scatters, but a multiplier does depend on scatters – x1 if you get 3 bonus symbols, x3 for 4 and x9 for five bonus symbols. The free spins are accompanied with a sticky wild feature where any random symbol on reels 2–4 is transformed into a wild on every spin. The wilds are sticky meaning that they are accumulated and pinned to their initial positions until free spins end, so on the final, ninth spin, you are going to have 9 wilds on the reels.

Another letter symbol (M) is a bonus trigger if 3+ of them hit the reels. Regular symbols will be removed and 15 question marks will appear instead. Your task is to pick them to reveal four different fruits that pay out x2 to x108 a total bet each. Finding a red X symbol ends the feature. As there’s only one red X beneath the face-down symbols, chances are high that you will open a considerable number of tiles before bumping into an X. Playing at max, you will win $10,800 if a pink diamond shows up on one of your picks.

The retro-styled Arcader has haunting graphics and lots of features such as stacked symbols, Expander bonus, free spins and a Mystery Bonus game.