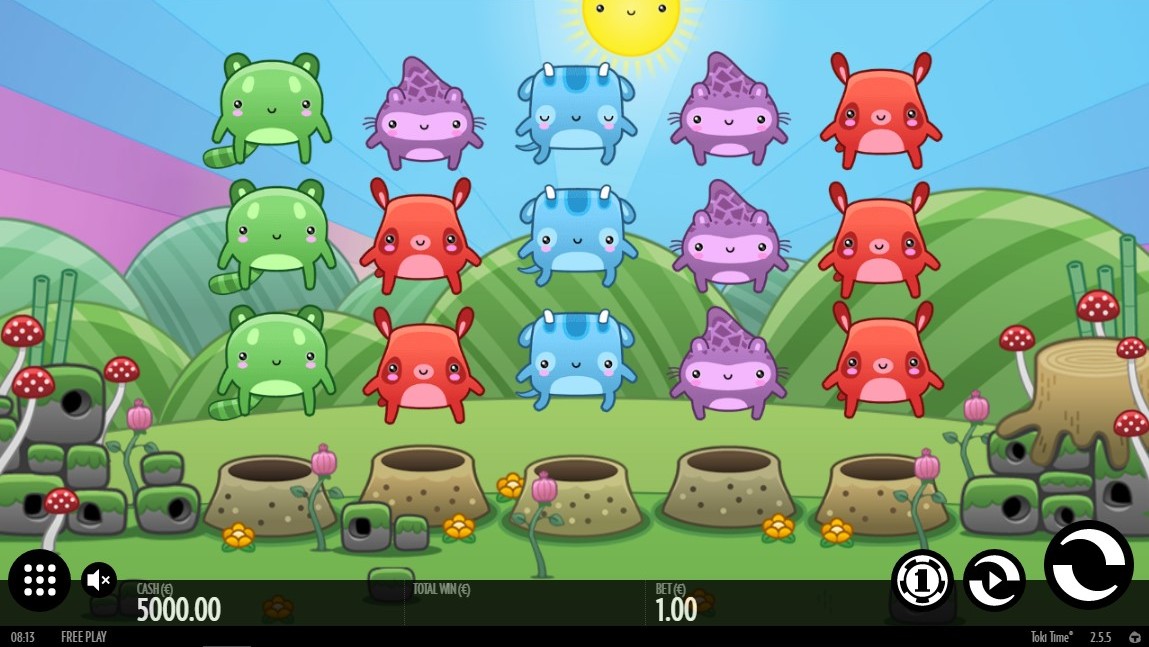 Toki Time is a visually arresting online slot with cartoonish symbols, funny soundtrack and very nice animations. The backdrop picture and symbols are the same as used in cartoon films for the smallest viewers. Feature wise, the slot has expanding wilds and these are the focus of the entire gameplay since wilds produce respins and lead to some healthy wins. Toki Time comes with a “Win Two Ways” model, meaning you get more chances to hit a combo. The jackpot prize in the slot is $2400 at max.

The symbols hover in the air above a kind of molehills from which they are rocketed to the sky and give way to new funny animals. All the 15 symbols create an organic whole with the backstage picture that, in combination with dancing flowers and mushrooms giving light like lanterns, create a cute and adorable landscape. You will want to play longer to keep an eye on how the day and night shift on a slowly rotating sky disk behind the symbols.

In Toki Time three or more identical symbols count when in succession from the leftmost reel to the right and/or from the rightmost reel to the left. The slot has 11 paylines but in fact there are twice as many because winning combinations are recognized as such in two ways. Besides, hitting any five of a kind awards twice its value for the same reason. Suppose, you hit five rainbow stars that pay out x24 a total bet according to the paytable, and you have wagered $100 on that spin. You are awarded $2400 when counting left to right and the same $2400 when this combo is evaluated in the opposite direction, right to left.

Non-feature symbols consist of different cartoon-style creatures, a rainbow cloud and rainbow star. All of them pay out when at least three like symbols stop on a payline. Awards vary from x0.2 to x24 a total bet.

As in other slots from Thunderkick, you have a single bet option. By clicking a casino chip in the user interface, you are offered to pick from 14 bet sizes between $0.10 and $100. The number of lines is permanent and cannot be altered.

A creature looking like a tall-necked sheep is a wild symbol. When it is blown out of a molehill, it always occupies three positions on the reel. The wild appears only on the second and fourth reels, helping normal symbols form combinations.

When one or two expanded wilds create a win, they trigger a respin. During the respin, the wilds remain locked on their positions, while the other reels are moving. If the respin was successful and you got a winning combination, another respin follows. The feature continues until no more winning combos are created.

Toki Time is an unbelievably fun 5-reel slot with 11 paylines and a Win Both Ways model. The slot’s highlight is an expanding wild that triggers respins for as long as they result in a win. The highest potential prize for a single payline win is $2400.