Play The Rift Slot for free 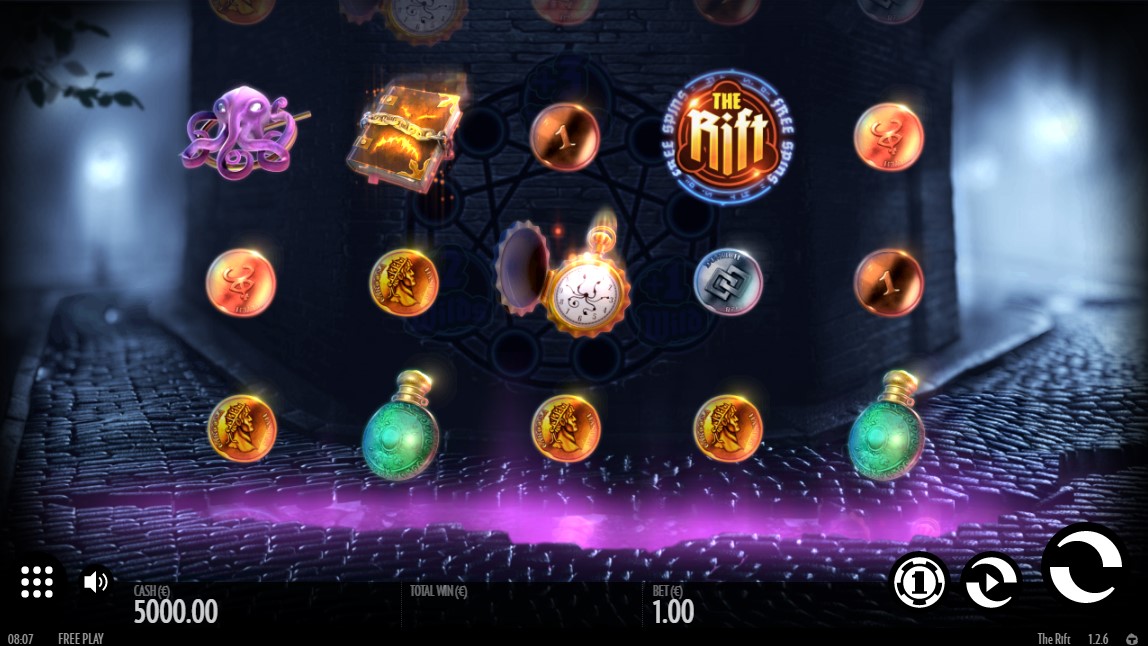 A strange rift filled with purple haze was discovered on a dark paved street. Quirky items come from this portal and some of them can make you very rich. No one knows whether this is a door to a parallel universe or some spin-off effect of a mad scientist’s invention. Anyway, this mysterious slot can produce massive wins and treat you with special features like sticky wilds and Rift spins. A sinister Rift Seal on the wall looking like a forbidding pentagram will provide you with more sticky wilds. This slot from Thunderkick has the max jackpot of $3000 but a free spin bonus can bring you much more.

The Rift is a 5-reel 17-payline video slot that has dark-colored design and the action takes place at night. A weird rift, a long crack on a paved street, is the place where the symbols go to. You will come across some strange-looking objects that definitely belong to the other world. There are four lower-paying symbols that resemble coins: a bronze coin with number 1 on it (x3 a total bet), a coin of some red metal depicting horns or an astrological sign (x4), a light blue token (x5) and a gold coin showing a portrait of an unknown man (x6). Other symbols are a green bottle with a golden cap (x10), a pink octopus (x12), a six-handed pocket watch (x17) and a locked book with fiery devilish mouth and eyes on the cover (x30). All the values given in brackets are based on a total spin bet, which can vary from $0.10 to $100. Therefore, the top three payouts for a single non-feature combination are $3000, $1700 and $1200.

A word “Wild” surrounded by an octagon is naturally a regular wild symbol. It substitutes for all themed icons and coins, helping them complete combinations. The wild itself can create its own combos and pays out x30 a total bet for five of a kind. A fewer number of wilds (4 or less) does not count. Furthermore, the wild is able to become sticky in some bonus phases of the gameplay – read below to find out more.

The feature is triggered by getting 2 bonus symbols represented by The Rift round logo. A Rift spin is in fact a traditional respin with an interesting twist to it. Before the feature starts, any wild symbol occurred in the triggering base game will become sticky. Besides, a random number of 1, 2 or 3 sticky wilds will be placed in any positions on the reels. These colorful symbols will be locked onto place until the end of the Rift Spin and ultimately contribute to big wins.

Three or more bonus symbols (The Rift logos) located in any place on the screen give you access to free spins. The initial quantity of free spins depends on how many scatters landed. Three, four or five logos give away 10, 15 or 20 free spins, accordingly. This is one of the most alluring and eye-catching features in the slot. Pay attention at an octagon behind the reels, called the Rift Seal. It has three big circles and six smaller ones around the perimeter. Every scatter appearing during free spins adds 1 step on the Rift Seal. Once filled in, every third step gives 2 extra free spins and puts an additional sticky wild on a random position, which will stay in place up to the end of free spins. When the Seal is completely filled (to do this, 9 scatters must land throughout the feature), you will have 3 sticky wilds on the game field.

Thunderkick designers seem to have found inspiration in Stephen King’s novels and short stories when creating The Rift because the slot is full of mysterious things and is made in predominantly dark shades. You will benefit from wilds, bonus scatters, respins and a free spin round with sticky wilds.