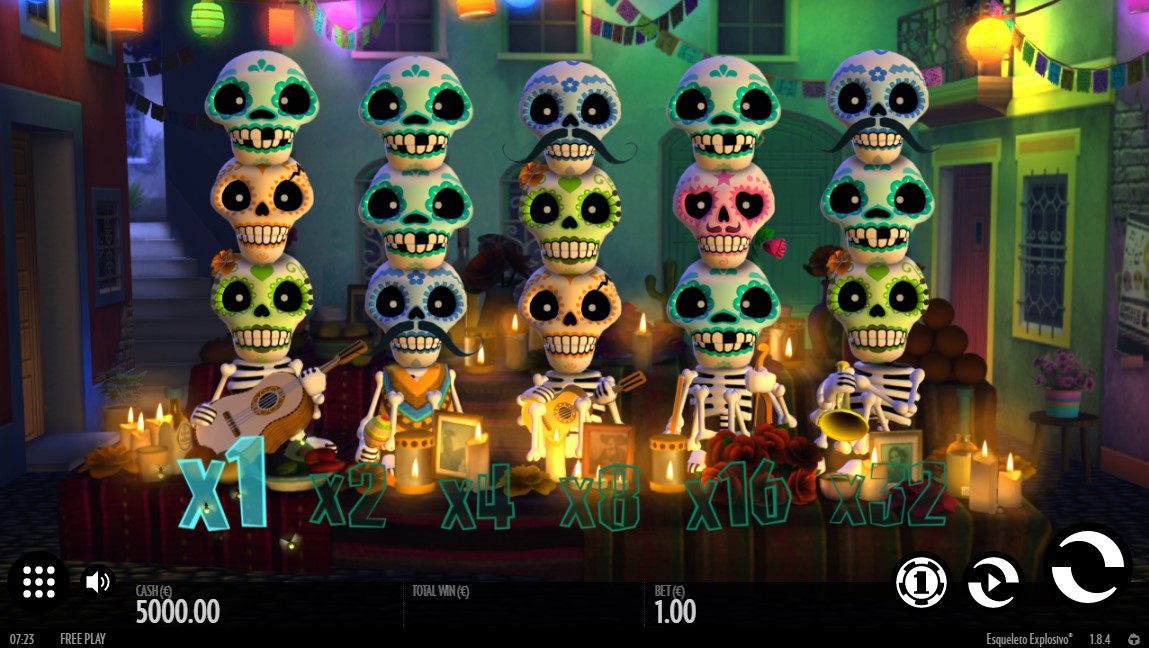 At the beginning of November, people of all ages in Mexico celebrate Día de los Muertos. They wear skeleton costumes, paint faces to look like skulls and take part in the parade. The slot released by Thunderkick features funny skeleton figures with skull painting makeup who play musical instruments and have fun even in the afterlife. You are going to come across Dropping symbols, a fantastic Mucho Multiplier and a fancy wild symbol that blows up neighboring symbols. Create some sugar calaveras, make your own calaca, and you are now ready to celebrate the Mexican Day of the Dead and win hauntingly beautiful prizes in Esqueleto Explosivo.

The slot has 15 visible symbols that do not spin on the start of a round. They just tumble like stones rolling down a slope and new skulls quickly emerge on their places. Due to 3D graphics and nice animated details like a swarm of insects hovering over lanterns or burning candles, the overall game design looks great and will appeal to pickiest gamblers. As always with slots from Thunderkick, you have 14 bet sizes, from $0.01 to $100 per spin, and the number of paylines is permanent at 17 without the option to alter their number.

There are only five regular skull symbols. They look alike but differ in color and slightly in shape. A purple skull pay out up to $70 for five of a kind while the highest payer, a red skull, awards $250. Prizes for other symbols are in between the two of these values.

When there is a win, the skulls contributing to the combination explode, creating empty spaces, at which point the skulls above, if any, fall onto the empty positions. Then new skulls coming from out of the screen fill in the spaces. The newly emerged symbols can form new combinations by themselves or when coupled with the existing skulls, and the feature keeps on doing so until no wins are completed. If you have ever played online slots from NetEnt and Microgaming, you might remember the similar feature put in place in their slots, called an avalanche or rolling reels.

Under the skulls is a multiplier trail featuring six values, x1, x2, x4, x8, x16 and x32. On clicking the spin button, the round starts and the initial multiplier is always x1. With each win resulting from a symbol drop, the multiplier increases one step. When the winning streak ends, the multiplier resets to its initial value of x1. Thanks to this feature, five red skulls can bring you have the chance to hit the maximum of $8000 if five red skulls occur with the multiplier of x32.

A golden skeleton carrying a trendy haircut and sunglasses is a wild symbol that has the following abilities:

The Explosivo wild cannot complete combinations by itself but this awesome symbol, more often than not, takes part in regular combinations.

Esqueleto Explosivo is a uniquely crafted slot with a strange skeleton theme. Features include dropping symbols, an increasing Mucho multiplier up to x32 and explosive wilds.