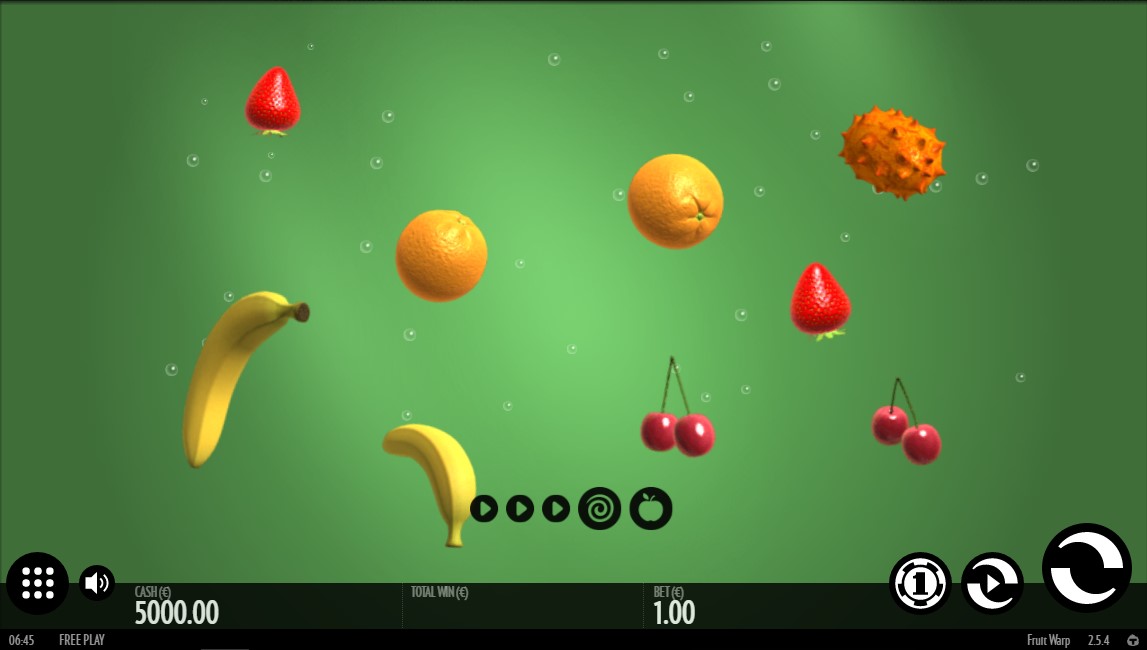 This extraordinary game from Thunderkick is unique in its own way. No reels, no paylines and no rectangular game board that gamblers got used to. There are just fruits floating in empty space every which way. But the general task is familiar to you – get three or more like fruits and earn a win. Get four and launch a fantastic portal respin. If more like symbols appear, the award can reach an eye-watering $21,600. Words can’t do the slot a justice because it is a truly unparalleled solution that you definitely must play and see its dizzying gameplay.

When loading the game for the first time, you will see no reel structure you got accustomed to. There are nine fruits visible on the screen against a pale green background that looks like liquid with small bubbles. Fruits are rotating slowly on the screen as if in zero gravity. What occurs when you push the spin button? The currently visible fruits quickly fall down out of sight and a new portion of 9 fruits fly in from out of screen. This looks really mesmerizing and makes you push “Spin” again and again to get an eyeful of the amazing zero-g behavior.

Bet sizes are common for a Thunderkick slot without something you didn’t already know. There are over 10 available bet levels starting at $0.10 up to $100 per spin. The fruits include (in ascending order of win values) cherries, plums, strawberries, oranges, bananas, grapes, carambolas, horned melons and dragon fruits. Win combinations count when three or more matching symbols appear among the nine symbols. Three-of-a-kind combos pay the maximum of x1 a total bet. This is not that much but there are plenty of other opportunities to win decent prizes.

Four like symbols trigger a portal respin – these four stay intact while the other five go through a portal and transform into other symbols. At this stage, chances are one or more of the fruits will be the same as the initial four that triggered the portal respin. If this happens, a fruit mode starts.

In the broadest sense, a Fruit Mode is a kind of free spins with multipliers, but here the similarity stops. Consider the following example: A portal respin ends with five bananas, which initiates a Fruit Mode. The background changes its color and a long multiplier scale, called the Warp Meter, appears at the bottom. The warp meter contains landmark values (multipliers of x2, x3, x5 and x9) and a couple of intermediate steps between them.

The feature begins at that the five, or greater, triggering symbols (bananas, in our example) disappear and new symbols come onto the screen. If at least one banana appears after the respin, it adds one step to the warp meter and one more respin is granted. At one point, you reach the first-level multiplier (x2), and after one or more respins you lock the second-level multiplier (x4) and so on. Along with multipliers, the trail contains an extra life that grants one extra respin if no fruit matches occur. Besides, the multipliers are dynamic and can increase their value higher than these listed above. All of these may sound a bit complicated but in practice everything will be really easy.

During a fruit mode, more than five identical symbols can land. The top three payouts are $21600 (nine dragon fruits), $5400 (eight dragon fruits) and $4500 (nine horned melons). These winnings are listed without regard to bonus multipliers that, if applied, can increase payouts by x9 and greater.

This totally superb game is like no other. It stands out in every respect: it offers an innovative no-reels layout, one-of-a-kind portal respins and some profitable multipliers that would catapult your winnings to unbelievable amounts.