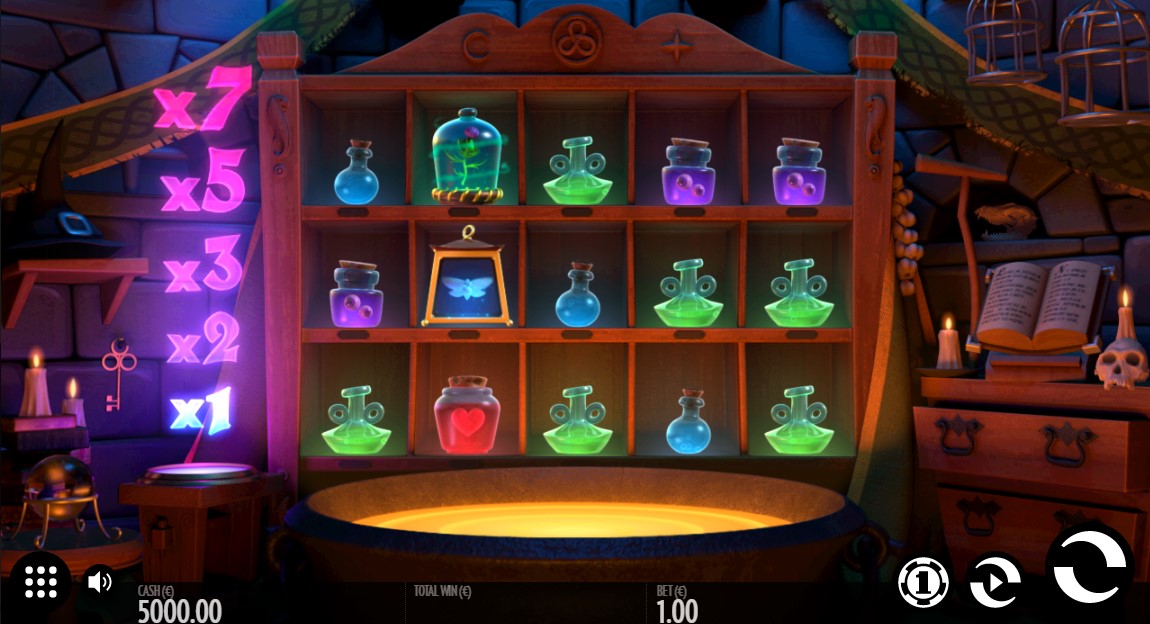 Frog Grog is a visually adorable five-reel slot with 3D graphics and eye-catching animations all the way. Its key features include dropping symbols and a growing multiplier that reaches x7. Moreover, you will benefit from a unique fire-breathing wild frog that behaves like a dragon burning symbols to ashes and adding credits to your bankroll. A quirky mystery game will let you mix the most non-appetizing ingredients in a cauldron and cook some tasty cash prizes. Try Frog Grog and enjoy true quality and impeccable bonus features from Thunderkick, an innovative Swedish slot-maker.

Thunderkick was established by talented developers who used to work in NetEnt, a trail-blazing company that set standards of quality for over ten years. That is why virtually every slot from Thunderkick is so creative and attractive for most online casino gamblers. The reviewed game is a glaring example of how elegant, distinctive and inspired their portfolio is. The slot takes you to an alchemist lab where an ardent wiseman is brewing a grog from weird ingredients such as eyes, moths and bubbling potions of different colors. The 15 symbols are located inside a wooden cabinet, in a dedicated cell each, and the cabinet itself is at a decrepit dark premise stuffed with cages, burning candles, garlic braids and skulls. Under the game field is a giant cauldron with a boiling golden broth. Fans of 3D games who like developer’s attention to details will certainly appreciate the artwork.

The gameplay takes place over 23 fixed paylines and a bet is adjusted between $0.10 and $100 with 14 bet sizes available. Non-feature symbols incorporate a blue potion, a green potion, a pair of eyeballs in purple liquid, a heart submerged into red liquid, a blooming flower in a jar and a white moth. The three best paying symbols are Moth ($1000), Flower ($600) and Heart ($350), all for five of a kind.

Dropping symbols and a multiplier trail

Every time a winning combination is completed, the involved symbols disappear and are replaced by new ones. The existing symbols do not fall down in place of the contributing symbols – the former just stay in place while the latter are replaced with new ones. For every symbol drop you are paid an award according to paytable figures.

To the left of the reels there’s a vertically arranged indicator showing five values from x1 to x7. With every symbol drop as part of one paid spin, the multiplier increases one level, so you get higher and higher wins on every subsequent drop of symbols. If you happen to land five moths at a multiplier of x7, your prize will be $7000 in addition to all previous wins along the multiplier trail.

A red frog jumping onto the screen is a wild symbol and it behaves differently from how a typical wild acts. After paying out a win (if any), the frog then spouts fire flames along the same row and reel it is on, and removes all the affected symbols on the way (except for other frogs that turn out on the fire path). The removed symbols are replaced with new ones and a multiplier increases one level. Wild frogs stay in place until they are part of winning combinations, thus bringing you increasingly better outcomes.

Activated randomly, the feature makes the screen neon blue. The cauldron begins producing thick blue smoke and every symbol except for Flower, Moth and Wild Frog fall from their positions into the cauldron. Bonus wins are counted as if the matching symbols are scatters. For example, before the mystery game begins, you have four green potions beside other symbols, scattered in any position. When the feature gets under way, the four potions sink into the cauldron and pay out as if they have created a four-of-a-kind payline combination (x0.4 a total bet). The same refers to other symbols. Furthermore, each win in the mystery game increases the multiplier trail so the feature can end up with your having a healthy amount on your coin balance.

Frog Grog is a superb 5×3 slot with rich graphics, dropping symbols, multipliers, a wild symbol with a twist, and a stunning bonus game. The max payout is $7000.