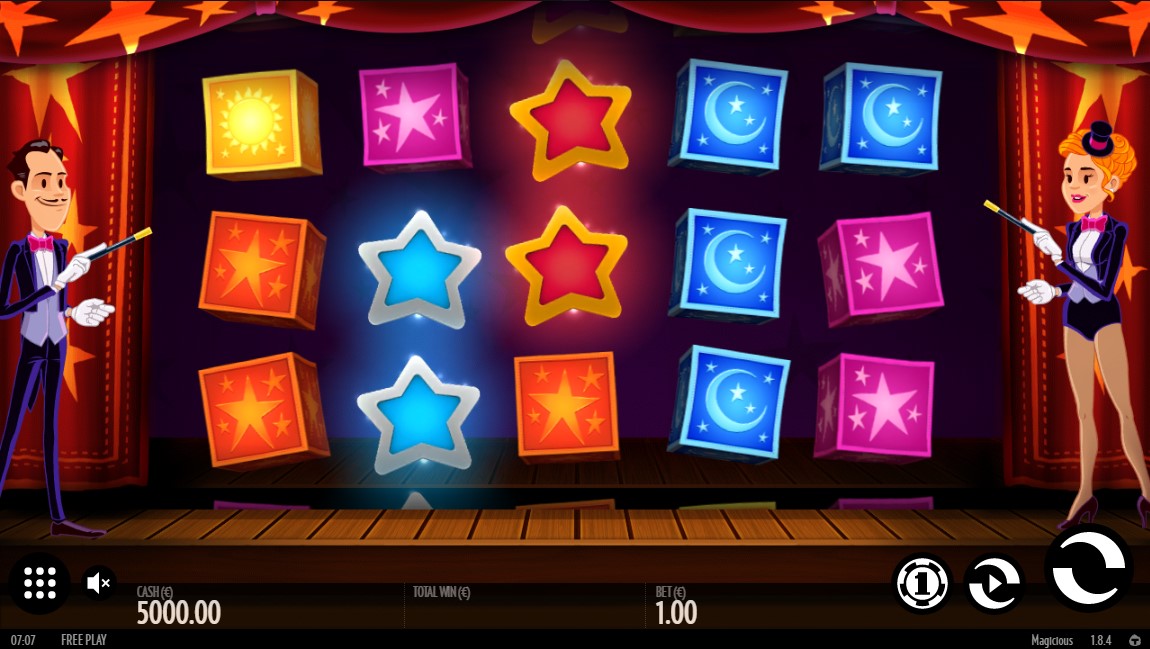 Magicious is a 5-reel 10-payline video slot devoted to stage magic. On the reels are numerous boxes and stars that combine to create combinations and pay out up to $4000. Even more magic will come your way when an expanding wild appears and make all symbols on the reels wild. On top of that, the slot is based on a win both ways system, meaning you get twice as many rewards. In respect to visuals, Magicious is good, though it lacks some refinement and detail; however, you will have a lot of fun and some pretty nice wins.

In Magicious, winning combinations (three like symbols or greater) count in both directions, left to right and right to left. This means you actually have 20 paylines. For example, you get five red stars aligned properly on a payline. The paytable reads the award is x40 times a bet for that combination so you are awarded $4 on the minimum bet or $4000 if playing at max. But thanks to the win two ways approach, that combo will be counted twice, meaning you get $8 on the minimum bet and $8000 at max.

The 15 symbols seem to be floating above a wooden stage, with a magician and his lovely assistant standing on both sides of the stage each. The symbols rock slightly in their places as if hung on invisible threads. When a win takes place, either magician waves his or her wand to send a kind of lightning onto the screen in order to show you the winning symbols. This animation is relay cool and eye-catching. Bet sizes are uniform across the Thunderkick slots library and include 14 available options starting at $0.10 and increasing up to $100 in reasonable increments. The number of lines is always fixed and you cannot deactivate any to wager less than $0.10 per spin.

Regular symbols include five magic boxes of different colors, a red star and blue star. The boxes are lower-paying symbols with the highest award of x4 a total bet for five green boxes ($400 at max). Stars pay off more generously: x20 a total bet for five blue stars and twice as much for five red stars.

It’s always better having three of the same symbols on any reel, especially on the first reel, than three different symbols. This enhances your chances to hit a few combinations at a time. The good news is that Magicious has stacked symbols that can appear on any reel, which will lead to greatly improved payouts.

A purple magic ball lands on reels 2, 3 and 4 only. This is a wild symbol with a couple of powerful abilities that will make your bankroll boost. As a wild, the magic ball substitutes for all symbols and helps theme complete combinations. As an expanding wild, the ball covers all the three positions on the reel it has landed on. The wild then holds the reel in place while the remainder respin once. There are two possible outcomes of the respin. First, no more expanding wilds land, you are paid out a paytable prize and the respin feature ends. Second, a wild appears on its dedicated reel (2, 3 or 4) and you are granted one more respin. The maximum amount of respins within one feature is 3.

The slot is recommended to those who like 5-reel solutions with expanding wild symbols. The win both ways model put in place in Magicious promises excellent winnings, while up to 3 respins provide even more immersive gameplay with even greater rewards.